About The Early American Editions of Samuel Johnson’s Rasselas 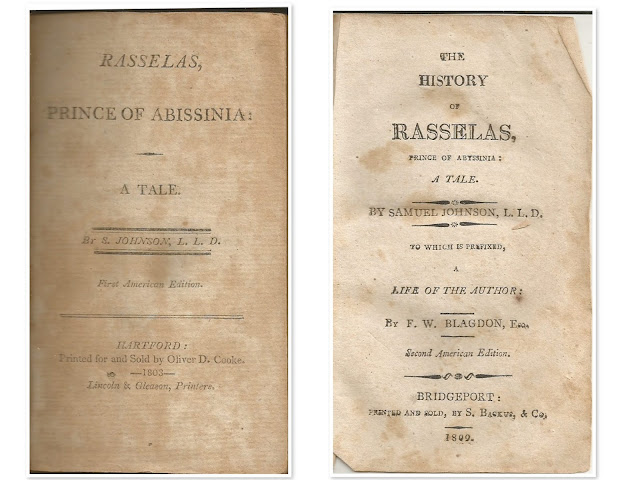 In my library, I have the stated First American Edition and the stated Second American Edition of Samuel Johnson’s Rasselas.  The publishers printed that information directly on the title pages.  We now know that the first and second American editions of Rasselas were published before 1803, but how were these two publishers to know that?  The first bibliography of the works of Samuel Johnson wasn’t published until 1915. 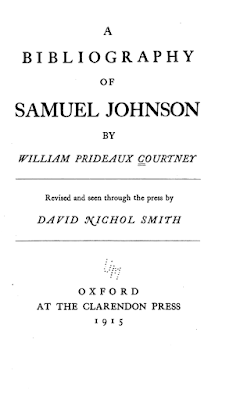 William Prideaux Courtney prepared this bibliography but died before it was printed.  David Nichol Smith made a few revisions and sent the bibliography thru the press in 1915.  The bibliographical information for the first listing of an American Edition of Rasselas, however, was noticeably scant.  And we would find out later that it was misdated. 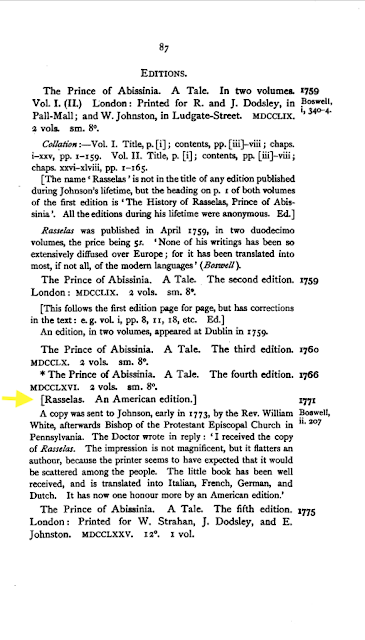 Unlike the other listings in the bibliography, Courtney and Smith did not identify a publisher or place published, or even provide a complete title for that matter.  The listing reads, “[Rasselas.  An American edition.]  1771”

Underneath the listing they added a note citing “Boswell, ii, 207,” which refers to George Birkbeck Hill’s 1887 edition of Boswell’s Life of Johnson.  If you go to that reference,  you will read that when White visited England in 1771, he told Johnson that an American edition of Rasselas had been published, and that he’d send him a copy.

Curiously, the next American edition listed in Courtney/Smith bibliography was the 1803 Hartford edition.  Two other American editions that were published before 1803 were not listed.   And neither was the 1809 Bridgeport edition.

To add to the misinformation, an article about Johnson first editions in the July 7, 1915 edition of The Bibliographer, edited by George Henry Sargent, cites the 1803 Hartford edition as the First American Edition of Rasselas. 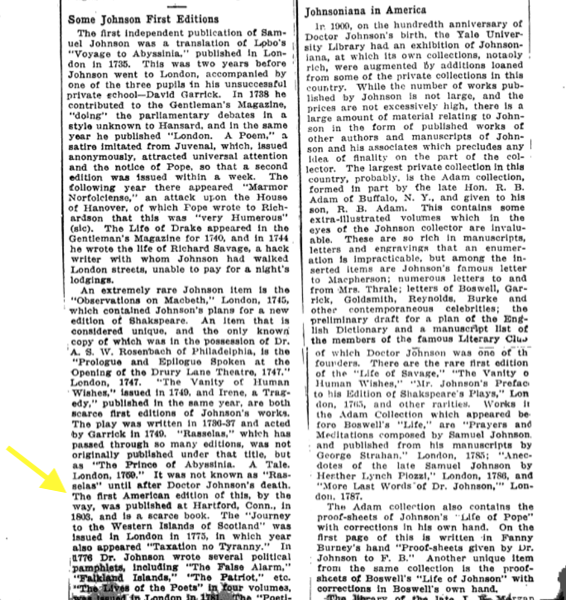 In a Jan. 1, 1953 article in The Papers of the Bibliographical Society of America titled “The First American ‘Rasselas’ and Its Imprint,” the Johnsonian Robert Metzdorf credits Chauncey Brewster Tinker with identifying the 1768 edition published by Robert Bell in Philadelphia as the First American Edition of Rasselas.  Tinker wrote about the discovery in 1924 in the Yale Review, and in a book the following year that was titled Rasselas In the New World.  At the time, he thought the 1768 edition was quite unknown to Johnsonian collectors.

According to Tinker, Robert Bell was an eccentric publisher.  Instead of listing “Philadelphia,” Bell listed “America” as the place of publication, and added, “Printed for Every Purchaser.”   Bell’s most famous publication was Thomas Paine’s Common Sense. 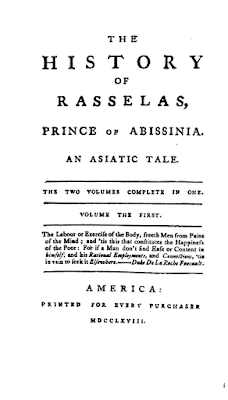 For the longest time, the 1984 Oak Knoll Books edition of Courtney & Smith’s bibliography was my bible on Samuel Johnson’s works.  It included a 1963 supplement by R. W. Chapman and Allen T. Hazen.  They referred to Tinker’s 1925 book in their listing of the First American Edition of Rasselas  and corrected the misdated date of publication from 1771 to 1768. 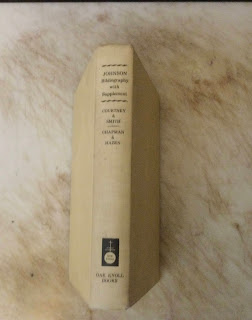 Today, we are blessed with A Bibliography of the Works of Samuel Johnson compiled by J. D. Fleeman, Oxford: Clarendon Press, 2000. 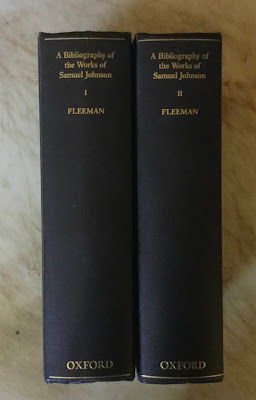 Fleeman spent over thirty years compiling his bibliography.  And he, too, died before it was published.  The only problem with the Fleeman bibliography is its cost.  You would be lucky to find a set for less than $500.  I was very lucky.  About fifteen years ago, a friend of mine found a set for me at a greatly reduced price because it was lacking its dust jackets.   Um…. It was not issued with dust jackets!

Here is Fleeman’s listing of the First American Edition of Rasselas: 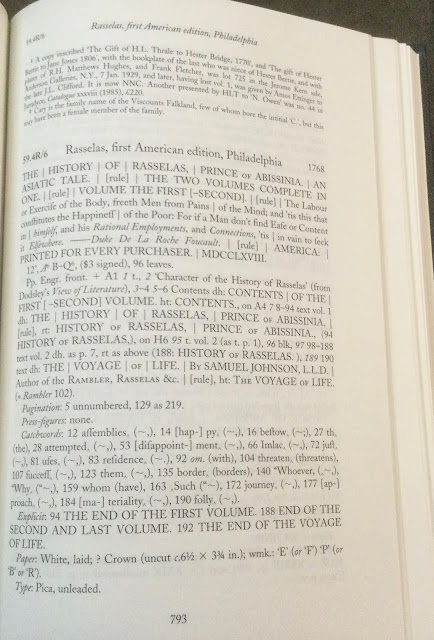 Here is Fleeman’s listing of the Second American Edition, which was published in Philadelphia in 1791: 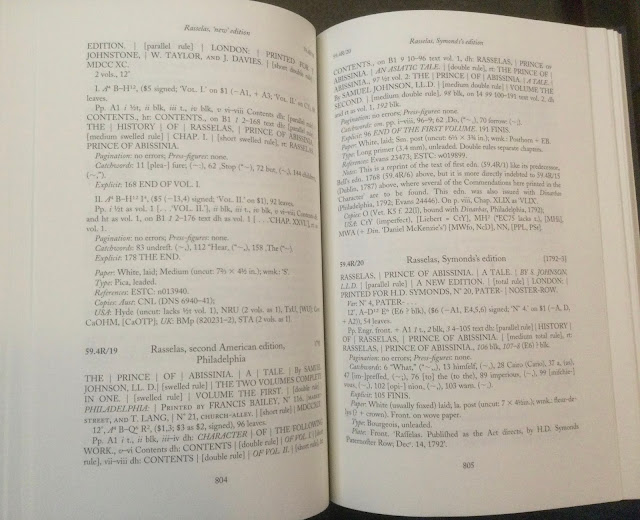 And here is his listing of the 1803 edition.  He includes the words “First American Edition” because he is posting what is stated on the title page:

Finally, in the age of the internet today we have far greater research capabilities than that of Chauncey Brewster Tinker in 1924, or that of Robert Metzdorf in 1953. Today, for bibliographical listings of the 1768 First Edition of Rasselas, I can cite Hildeburn 2368 and Evans 10939.  Both works were published before 1924.  The Hildeburn volume was published in 1886, and the Evans volume was published in 1907. 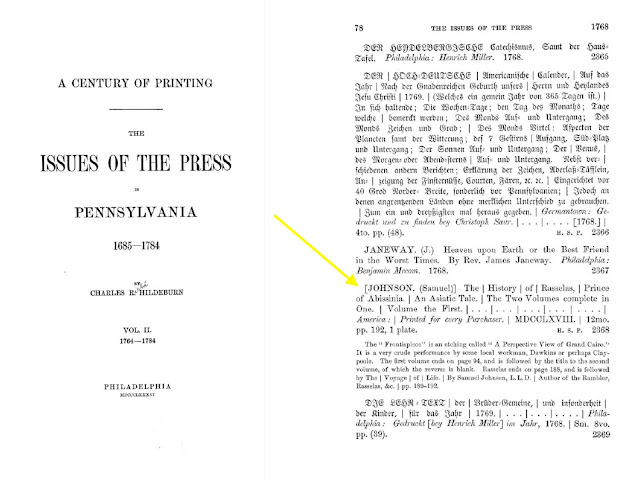 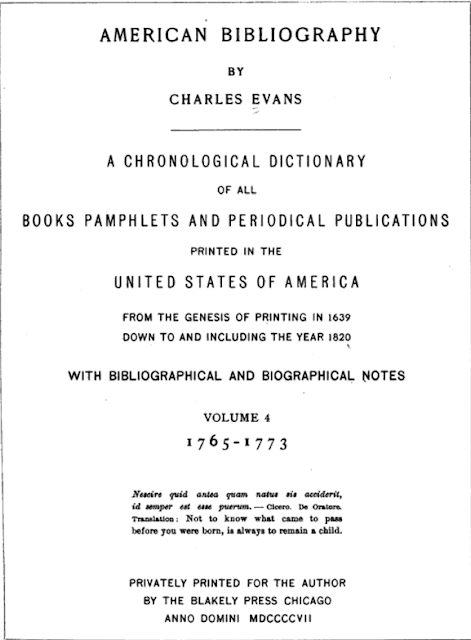 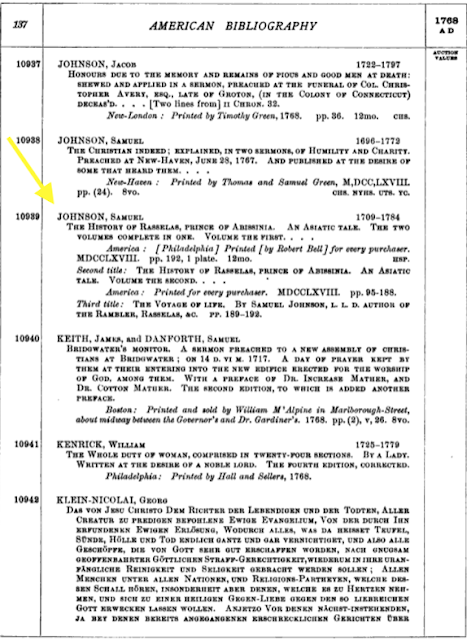 Episode 501 Your Transcript is Ready!