In Our Wild Farming Life, Lynn and Sandra recount their experiences as they rebuild their new home and work out what kind of farmers they want to be. They learn how to work with Highland cattle, become part of the crofting community and begin to truly understand how they can farm in harmony with nature to produce wonderful food for themselves and the people around them.

The following is an excerpt from Our Wild Farming Life by Sandra Baer and Lynn Cassells. It has been adapted for the web.

The question in all of this revolves around what our role in this world is and what we are trying to achieve? To not manage land involves letting go, giving that control and responsibility back to nature and instead adopting an approach to work with it – a fundamental shift in practice and mindset. And we found ourselves asking how such a radical shift could fit a model of farming, one of the most impactful human actions that have shaped the modern world into what we know it as today? Our goal was to remove the focus from asserting our control over the land to managing ourselves and our actions instead, to play our part as biodiversity enhancers and enablers by assessing every action we take on our land on whether it would have a positive environmental outcome. What we were trying now to learn was how. 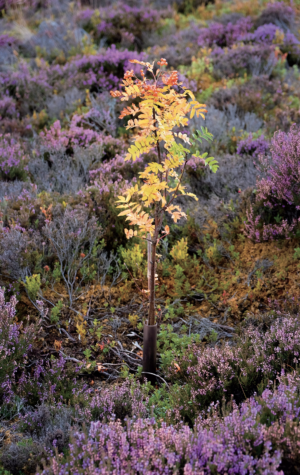 As we started to question all these mainstream labels and approaches, we found ourselves drawn even closer to the relatively new movement of rewilding; an approach that aims to use human intervention to help restore nature to a more harmonious and ecological balance within itself, and then reducing this intervention over time as natural systems begin to operate at a more optimal level. Rewilding is a topic that has grown in mainstream popularity but it has also developed a culture of polarity where the needs and wants of nature are often pitted against the needs and wants of people. Before Lynbreck, we spent two years working on rewilding projects and the experiences we had and the people we met along the way made a huge impact on us. We saw firsthand the transformative results that planting trees, removing old fences, restoring peat bogs and reducing grazing could have on a landscape formerly depleted in natural diversity.

But, as our lives started to transition into full-time farming, our active affiliation with the rewilding movement dwindled. Many individuals have their own definition of what rewilding actually means and the conversation is usually dominated by talk of nature in a separate sense to humans, often in a way that suggests it does not include humans and where the main topics generally focus on the reintroduction of species such as beavers, lynx and wolves. These are commonly referred to as keystone species – those that have a huge impact on the land they live, often changing habitats and affecting densities of other wildlife. They are given major emphasis in the rewilding movement as they play such a fundamental role in redressing the ecological imbalance.

However, one of the problems is that these animals can also be seen as posing a direct threat to farming operations because their impact could have a fairly swift effect on the land and on livelihoods. The worry is that beavers, as they build their dams across rivers, might cause flooding of fields, and lynx and wolves could hunt farmed livestock. These perceived threats then dominate the debate as views become increasingly extreme and entrenched and the arguments become louder and more frenzied.

There are many in the rewilding movement who try to encourage a conversation that includes people, but the dominant, more extreme rhetoric can drown these voices out. The fact that we are killing off species and habitats is talked about a lot, but what we don’t talk about enough is the role that people play as a part of nature in our roles as mammals, omnivores and predators, acknowledging that it is here that the problem lies. Nature, as a system, is not broken, it is just wounded by the continuous dominance that we inflict on it. Nature doesn’t need to be rewilded, people do. As we came to understand this, our emphasis shifted from restoring landscapes and reintroducing species to reconnecting people to the land and rebuilding our relationship with nature to shape positive change collectively.

And, as we began to question all these labels and ways of working, we started to feel increasingly distant from all the communities to which we partly belonged to – farming, conservation, rewilding. Neither of us have ever seen ourselves as pioneers or entrepreneurs, nor have we particularly looked for ways to stand out from the crowd or purposefully disrupt the mainstream. Yet, individually we are both quite headstrong, the kind of people whose heart and gut rule the head, using our instincts to guide us rather than what is trendy, popular or new. Gradually, we found ourselves feeling somewhat isolated, navigating through the new life we had chosen, but where the guides were few and far between. And so we eventually accepted that the closest approach we could find that best matched our aspirations was that of the growing movement of regenerative agriculture, which, in its purest form, is a way of producing food with an underlying current of ‘regenerate everything as you go’ – in essence our soils, our land, our people and our communities. 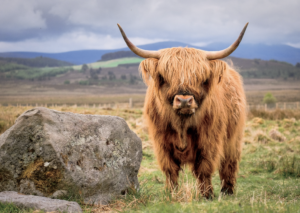 By the end of our second summer at Lynbreck, our vision was simple: to farm in a way where the impact of our animals would benefit the health of the soil and increase the diversity and abundance of species both below and above ground, and we reflected again on the observations of Allan Savory. For years, Allan had watched the African plains desertifying, resulting in a mass loss of wildlife, habitat and livelihoods. Initially, he placed the blame at the feet of wild herbivores repeatedly taking too much from the landscape, a term referred to as overgrazing, and he ordered the mass culling of thousands of elephants to address the problem. Regrettably, his follow-up observations confirmed that this was not the solution as the situation only worsened after the mass slaughter.

Allan began to realise that it was not the numbers of animals that were the problem, it was the way that these often managed groups were grazing that needed addressing. He talks about the role that large wild herds play in the landscape, grazing the land in a close group and always on the move, not returning to that area for maybe months or years and so allowing the vegetation to rest, recover and regrow as the soil is nourished from the trampled, ungrazed vegetation and piles of dung. His observations led him to realise that farmed animals needed to mimic these patterns if long-term damage was to be avoided, biodiversity maintained and soil fertility enhanced.

At Lynbreck, we would watch and observe the reaction from our land, changing and amending plans when needed, learning on the job of how to farm, with nature as our teacher. We were looking for more worms in our soil, more dung beetles breaking down manure, more species of grasses and wildflowers, more trees, more birds, insects and butterflies, all growing in greater abundance and diversity that would indicate our actions were continuously regenerating the land.

And while our approach was maybe different to others that farmed around us, it didn’t really seem to matter. Most of the locals were just happy to see people wanting to work the land. For many, as long as we were producing food, as far as we could see, they weren’t too bothered as to how we went about it.

A Walk on the Wild Side

The Road to Lynbreck Croft