Below Zero by Ali Hazelwood, is the last novella in The STEMinist Novellas and shares aerospace engineer Hannah’s story as it takes us to NASA and the dangerous landscape of the Arctic. Narrated by Savannah Peachwood, this romance between two space geeks will curl your toes. 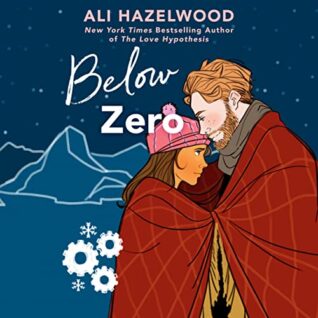 It will take the frosty terrain of the Arctic to show these rival scientists that their chemistry burns hot.

Mara, Sadie, and Hannah are friends first, scientists always. Though their fields of study might take them to different corners of the world, they can all agree on this universal truth: when it comes to love and science, opposites attract and rivals make you burn…

Hannah’s got a bad feeling about this. Not only has the NASA aerospace engineer found herself injured and stranded at a remote Arctic research station—but the one person willing to undertake the hazardous rescue mission is her longtime rival.

Ian has been many things to Hannah: the villain who tried to veto her expedition and ruin her career, the man who stars in her most deliciously lurid dreams…but he’s never played the hero. So why is he risking everything to be here? And why does his presence seem just as dangerous to her heart as the coming snowstorm?

This trilogy of novellas follows Mara, Sadie, and Hannah, three friends and scientist. The stories work on their own and feature one friend and their romance. However, I highly recommend listening to them in the order of their release.

Ever since Hannah saw the rover landing on Mars, she has wanted to work at NASA. During a PHD assignment, she interviews Mara’s distant cousin, Ian, who works at NASA and was a part of the landing team. Their chat ends with some heated moment that they’ll both think about late at night.

I found myself rooting for Hannah and Ian from almost the get go and wanting to slap them both in the back of the head, Gibbs style (NCIS). Hannah doesn’t do relationships. She loves sex, but no one sticks around and she isn’t about to put herself out there. Ian, on the other hand, while tall, ginger and sexy, has communications and experience issues. Told from Hannah’s point of view, we are treated to her inner dialogue. It gives us insight and some laugh out loud moments. What a pair.

When Hannah lands her dream job at NASA, it looks like she might have a second chance with Ian, but when her proposal is shot down for funding, things take a turn. Thankfully, her direct boss has her back and helps her secure funds. Those funds take her to the Arctic for field testing. While the tale was light, it fed my inner nerd with talks of space and land rovers.

Will Hannah’s project yield results? Is there any hope for Ian? The second half of the story brings danger, rescues, and peanut butter sandwiches. A sweet, geeky romance awaits you in this swoon-worthy, slow burn, sizzling romantic tale..

I cannot wait for Ali Hazelwood’s next release, Love on the Brain, which releases in August. I will definitely be listening. Her writing style works perfectly in audiobook format.

Ali Hazelwood is a multi-published author—alas, of peer-reviewed articles about brain science, in which no one makes out and the ever after is not always happy. Originally from Italy, she lived in Germany and Japan before moving to the U.S. to pursue a Ph.D. in neuroscience. She recently became a professor, which absolutely terrifies her. When Ali is not at work, she can be found running, crocheting, eating cake pops, or watching sci-fi movies with her two feline overlords (and her slightly-less-feline husband).

Savannah Peachwood is an award-winning audiobook narrator & love lover. She has narrated audiobooks for many New York Times & USA Today Bestselling authors. She was raised in the South and now lives in the big city.