In My Hands I Hold A Knife by Ashley Winstead was the perfect listen to satisfy my craving for a mystery thriller. Narrated by Vanessa Johansson, the author kept me guessing as we attended the ten-year college reunion of Jessica Miller and her friends. Secrets won’t stay buried forever….. 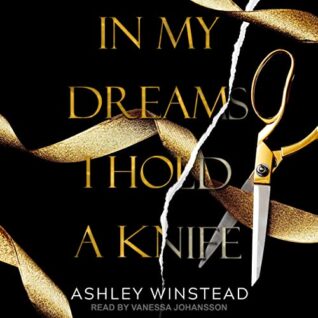 Ten years after graduation, Jessica Miller has been invited back to her university for a reunion and she is obsessed with dazzling everyone with her beauty and success. This time when they see her, it has to be perfect because she is perfect. Not the girl she was when she left campus, back when Heather Shelby’s murder fractured everything, including the tight bond linking the six friends she’d been closest to since freshman year.

But there’s more at stake than the delicious envy of her peers—not everyone is ready to move on. Not everyone can let Heather’s murder go unsolved. In fact, someone has orchestrated the whole weekend to trap the real killer. As the weekend unfolds and they get closer to the truth, the group finds there was more than murder hidden amongst them on campus.

Told in racing dual timelines, with a dark campus setting and a darker look at friendship, love, obsession and ambition, In My Dreams I Hold a Knife is an addictive, propulsive millennial thriller you won’t be able to put down.

In My Dreams I Hold a Knife, is told in dual timelines as we travel back to University with Jessica Miller. Ten years ago, her senior year was tarnished when her roommate was brutally murdered. The case is unsolved, although the police had a prime suspect, a boy who became a piranha to his classmates, all except Jess, who never truly believed he did it.

Suspenseful and dark with complicated characters, I was instantly pulled in. The tale that unfolds was addictive, cruel, calculated, and filled with unexpected twists.

I loved the dual timelines, which allowed us to get to know Jessica and her five friends. Their time on campus was filled with highs and lows as each tried to find their place. While none of the characters were likeable, the author did an excellent job of seeing through their facades and showing the reader/listener their insecurities, issues, fears and dreams. Jessica has serious daddy issues and some memory loss. Her development was well done and kept me guessing.

The build up was fantastic as things in the past clicked with the present timeline. With each switch, the tension grew and I couldn’t stop listening. Just when you thought you knew, you didn’t, and it was brilliant.

Listening to the audio performed by Vanessa Johansson is a must. She captured the voices, personalities, and tension perfectly. Her narration added another layer of enjoyment and realism to the story.

This was my first mystery thriller by Ashley Winstead, and I look forward to seeing what she does next. Fans of Ruth Ware and Paula Hawkins will enjoy this suspenseful thriller.

Ashley Winstead is an academic turned novelist with a Ph.D. in contemporary American literature. She lives in Houston with her husband, two cats, and beloved wine fridge.

Vanessa Johansson is a film/theater actress and voice-over artist who graduated from Carnegie Mellon and later trained at the American Academy of Dramatic Arts in New York. An AudioFile Earphones Award–winning narrator, she has worked on approximately sixty audiobooks. Her training and work as an actress bring a richness to her narration and character work. Vanessa’s pleasant, mid-range voice is very agile, and she has narrated many different genres of audiobooks, including mystery, young adult, romance, memoir, chick-lit, and books for children. A native New Yorker, she lives in Greenwich Village but loves to travel whenever she has the opportunity.