I found out about all the hype surrounding The Altas Six by Olivie Blake after the synopsis and cover snagged my attention. Narrated by James Cronin, Siho Ellsmore, Munirih Grace, Andy Ingalls, Caitlin Kelly, Damian Lynch, David Monteith, and Steve West, the idea of a dark academy with a library of knowledge pulled me right in. 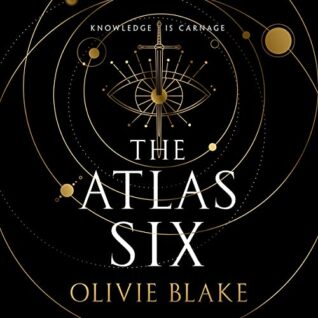 The Alexandrian Society, caretakers of lost knowledge from the greatest civilizations of antiquity, are the foremost secret society of magical academicians in the world. Those who earn a place among the Alexandrians will secure a life of wealth, power, and prestige beyond their wildest dreams, and each decade, only the six most uniquely talented magicians are selected to be considered for initiation.

Enter the latest round of six: Libby Rhodes and Nico de Varona, unwilling halves of an unfathomable whole, who exert uncanny control over every element of physicality. Reina Mori, a naturalist, who can intuit the language of life itself. Parisa Kamali, a telepath who can traverse the depths of the subconscious, navigating worlds inside the human mind. Callum Nova, an empath easily mistaken for a manipulative illusionist, who can influence the intimate workings of a person’s inner self. Finally, there is Tristan Caine, who can see through illusions to a new structure of reality – an ability so rare that neither he nor his peers can fully grasp its implications.

When the candidates are recruited by the mysterious Atlas Blakely, they are told they will have one year to qualify for initiation, during which time they will be permitted preliminary access to the Society’s archives and judged based on their contributions to various subjects of impossibility: time and space, luck and thought, life and death. Five, they are told, will be initiated. One will be eliminated. The six potential initiates will fight to survive the next year of their lives, and if they can prove themselves to be the best among their rivals, most of them will.

The Altas Six is the first in a trilogy filled with magic, science, knowledge and dark academia pulled me in from the beginning. Multiple POVs shared the story as six individuals worked as a team and on their own to be among the chosen five … only it’s not that simple. Alliances, knowledge and outside factions kept me listening to this engaging tale.

With multiple perspectives, I was pleased with my decision to listen and even more pleased that the publisher chose a full cast of narrators to give voice to the different perspectives. While the author gave them all unique personalities and traits, the different voices made transitioning and group conversations a boost.

The Atlas Six centers on a secret society that initiates five new members every ten years. Six candidates with the rarest powers are invited to compete for a fellowship.

Atlas Blakely approached and presents them with an offer. They will have one year, during which they will have access to the Alexandrian Society’s archives. They will be judged on their contributions to various subjects of impossibility: time and space, luck and thought, life and death. At the end of the year, five will become members and one will be eliminated.

The author does a wonderful job of giving these characters depth with unique abilities, a thirst for knowledge and brilliant minds. Each has their own personalities, insecurities, and moral compass. They felt real and expressed raw emotions. While I didn’t love them all, I was fascinated and curious about them, from skill sets to motives and their reactions. It was interesting to see them interact and form bonds. Their conversations dabbled from scientific theories to philosophical discussions. A tagline from the publisher states perfect for fans of the Umbrella Academy and I felt that statement to be true.

Romances, squabbles and more occur since they dorm together. The world building was well done with teasers, particularly regarding abilities. Seeing them in action was mind-boggling. One of their jobs while in residence is to protect the archives. We learn of other factions and engaging in mental combat. The pacing dragged a little in the middle before building to a crescendo.

I am glad I chose the audio format and applaud the decision to use a full cast. James Cronin, Siho Ellsmore, Munirih Grace, Andy Ingalls, Caitlin Kelly, Damian Lynch, David Monteith, and Steve West captured our characters and secondary characters brilliantly. They voiced their emotions from Libby’s anxiety to Nico’s sharp wit. They worked well together, and the production was well done, making it a seamless listen.

Diverse characters and representation, secret societies, a library to make you drool and a competition you won’t want to miss. I am looking forward to listening to THE ATLAS PARADOX coming October 2022.

Olivie Blake is the pseudonym of Alexene Farol Follmuth, a lover and writer of stories, many of which involve the fantastic, the paranormal, or the supernatural, but not always. More often, her works revolve around what it means to be human (or not), and the endlessly interesting complexities of life and love. Olivie has penned several indie SFF projects, including the webtoon Clara and the Devil with illustrator Little Chmura and the viral Atlas series. As Follmuth, her young adult rom-com My Mechanical Romance releases May 2022. Olivie lives in Los Angeles with her husband and new baby, where she is generally tolerated by her rescue pit bull.

Originally from Cleveland, Ohio, Caitlin Kelly moved to New York City to pursue her theatrical training at NYU Tisch School of the Arts. She has a BFA in drama and studied musical theater at CAP21. Caitlin has been working as a voice-over artist since 2009. She got started in VO while living in Tokyo, Japan. Caitlin toured Japan with Disney’s World of English and World Family Club as a performer and a puppeteer. Caitlin currently lives in Brooklyn, New York, and can be heard on Time for Kids, forbes.com, and slate.com.

Damian graduated from the University of Nottingham with a second class division one BA Honours Degree, in French & German (which included a year working as a Language Assistant in a bi-lingual grammar school in Northwest Germany). After working for a few years in international sales, Damian decided to retrain as an actor and completed a Post Graduate Diploma in Acting at the prestigious Webber Douglas Academy of Dramatic Art in London.

Steve West is a London born, award-winning actor and voice artist based in Los Angeles. Career highlights include performing for the Queen at Buckingham Palace, being killed by Chucky “the killer doll” in the cult movie Seed of Chucky, appearing in AMC’s hit series Mad Men, and playing the lead in Sony’s epic video game The Order: 1886. He has recorded over 200 audiobooks across all genres and has won 13 awards, including over 10 Earphones Awards; The AudioFile & Romantic Times’ Best Romance Narrator of The year, and a SOVAS. He also has multiple Audie nominations to his name.