Narrated by Amy McFadden Touched is book one in the Marnie Baranuik files, part of The Marnie Baranuik Files Omnibus. This first in series delivered snark, tons of sexual innuendo and plenty of action as someone sets out to kill Marnie.

The Marnie Baranuik Files: Omnibus One Audiobook contains the novels Touched, Death Rejoices, and Last Impressions and comes in just under fifty-seven hours.

I decided to review each story on its own. The stories are narrated by Amy McFadden and feature the adventures of Marnie Baranuik, a daysitter, witch, and psychic detective working closely with the Preternatural Crimes Unit (PCU) of the FBI. 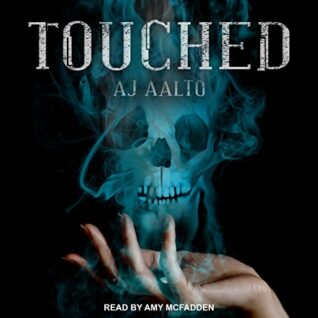 For decades, Marnie Baranuik has been the vigilant but often frustrated daytime guardian for Lord Harry Dreppenstedt, undead aristocrat and all around sass-mouth. As a DaySitter, witch, and psychic detective working closely with the Preternatural Crimes Unit of the FBI, Marnie battles a wild assortment of crimes and monsters, but none so formidable as her own flaws and the poor judgement of her heart.

In this, the first trilogy in the Files, Marnie throws down with dark witches, malevolent psychics, smart-mouthed vampires, accidental ghouls, zombies, a slap-happy poltergeist, and a hot vampire hunter who may drive her wild if he doesn’t drive her off the deep end first.

Join Marnie and her resident Cold Companion in the novels Touched, Death Rejoices, and Last Impressions, and let the weird times roll.

Apparently she slept with a detective from the PCU, before realizing he was engaged and almost getting herself killed. Upset, angry, and ashamed, she left the unit. Tucked away in a remote cabin with her vampire, she is surprised to find Detective Mark Batten and his partner on her doorstep. They’ve got a case and need her assistance.

The story that unfolds was great fun with harpies, ghouls and vampire hunters. Marnie seems to be at the center. Aalto mixes danger while forcing Marnie to be near Batten, the object of her lust, and Harry, her undead partner. It’s a bit of a love triangle.

From the characters to the crazy case, I had a fantastic time. Marnie is kickass, smart and, like a lot of my favorite fantasy heroines; A clever idiot. She forgets her gun, walks into danger without alerting her team, and finds herself in more than one pickle. Fans of Rachel Morgan and Kate Daniels will know what I mean.

I enjoyed the world building, characters and endless storylines the Baranuik Files offer and look forward to continuing this omnibus with Death Rejoices. While the storyline is dark and intense, it’s made light by the snark, overactive libidos and food talk. Our girl takes cookies and coffee seriously.

Amy McFadden narrates and brilliantly captured the voice and antics of Marnie, Harry and Batten. She did a wonderful job with the villains and monsters. She enhanced the story from the humor to the crazy thoughts in our protagonist’s head.

AJ Aalto is the author of the paranormal mystery series The Marnie Baranuik Files. Aalto is an unrepentant liar and a writer of blathering nonsense offset by factual gore. When not working on her novels, you can find her singing Monty Python songs in the shower, eavesdropping on perfect strangers, stalking her eye doctor, or failing at one of her fruitless hobbies. Generally a fan of anyone with a passion for the ridiculous, she has a weak spot for smug pseudo-intellectuals and narcissistic jerks; readers will find her work littered with flawed monsters and oodles of snark. AJ cannot say no to a Snickers bar and has been known to swallow her gum.

Amy McFadden is a five-time Audie Award Finalist, an Audie Award winner, and has multiple Earphones Awards. The narrator of 400 titles across a wide range of genres, she specializes in mysteries, thrillers, and urban fantasy.