The War of Two Queens by Jennifer L. Armentrout, the Fourth novel in the romantic fantasy series Blood and Ash, delivered suspense, unions, alliances, loss and enough heat to scorch you. Narrated by Stina Nielsen and Tim Campbell, this behemoth of an audio will keep you listening well past your bedtime. 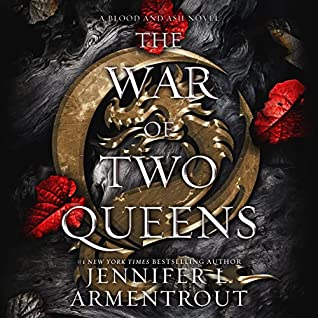 War is only the beginning…

From the desperation of golden crowns….

Casteel Da’Neer knows all too well that very few are as cunning or vicious as the Blood Queen, but no one, not even him, could’ve prepared for the staggering revelations. The magnitude of what the Blood Queen has done is almost unthinkable.

And born of mortal flesh….

Nothing will stop Poppy from freeing her King and destroying everything the Blood Crown stands for. With the strength of the Primal of Life’s guards behind her, and the support of the wolven, Poppy must convince the Atlantian generals to make war her way – because there can be no retreat this time. Not if she has any hope of building a future where both kingdoms can reside in peace.

Together, Poppy and Casteel must embrace traditions old and new to safeguard those they hold dear – to protect those who cannot defend themselves. But war is only the beginning. Ancient primal powers have already stirred, revealing the horror of what began eons ago. To end what the Blood Queen has begun, Poppy might have to become what she has been prophesied to be – what she fears the most.

As the Harbinger of Death and Destruction.

As soon as I received The War of Two Queens, I dove in. I needed more of Poppy and Casteel. I was also desperate for the Blood Queen to get her just desserts. With the powers of the Primal Guards and her allies behind her, I was ready for Poppy to battle. As with most fantasy series, the Blood and Ash series is best listened to in the order of their release. Relationships, world-building and foreshadowing make it a necessity.

I don’t read the blurbs in series I am listening to and was initially surprised. Casteel being taken was not something I was expecting. I did not like it and wanted them reunited. The twists and turns we encountered as Poppy, Kerian, and the Wolven prepared for battle had me on edge. It did, however, allow Poppy to stand on her own. It allowed us to see another side of her and come into her own as the Queen. I missed Casteel despite getting chapters from his perspective and a bit of magic.

The build up, planning, battles and time spent in Atlantia with the Blood Queen were intense. Oh, how I love to hate mommy dearest. Seeing Poppy face off with her in this game of cat and mouse kept me enthralled. Each new book leaves me yearning for the next. There are two more novels slated, and the anticipation has me giddy.

While all the books are filled with a steamy romance, this installment amped up the heat. Foreshadowing and a dark twist by the Queen to get her way, led to Poppy taking part in the joining. The joining is a magical act of sharing blood. Casteel and Kerian joined themselves to Poppy. View Spoiler »It was sexy, dark, kinky, and consensual. It was also raw, primal, and filled with emotions. These three care deeply, and trust one another. It was well done and not at all unexpected. While sexually not my cup of tea, I didn’t see it as something that will be repeated. « Hide Spoiler Casteel and Poppy are mates and Kerian is beloved by them. He is one of their pack, if that makes sense. Kerian and Poppy were back to trading witty barbs and acting like siblings soon after.

I adore the characters in Poppy’s inner circle, but also loved new characters and older ones we learn more about. Armentrout gives us new characters to loath and others to intrigue us.

So much happened that I feared Poppy would lose who she was and all that she stood for. Her compassion for the kingdom and those she loves made her a true Queen, even as she struggled to contain her emotions and powers. The world-building, plot twists and build up were splendidly done. The thread of dealing with the prophecies and the “Harbinger of Death and Destruction” were cleverly done.

We get answers, surprises, and hints of things to come. I for one, cannot wait for the next audiobook. Stina Nielsen and Tim Campbell do a splendid job with the narration. They capture the emotions of the characters and intensity of the scenes brilliantly. When an audiobook is over twenty-six hours and you’re crying because it’s over too soon, you know it was well done.

# 1 NEW YORK TIMES, # 1 International, and USA TODAY Bestselling author Jennifer L. Armentrout lives in West Virginia. She also writes under the name J. Lynn. When she’s not hard at work writing, she spends her time, reading, working out, watching zombie movies, and pretending to write. She shares her home with her husband, his K-9 partner named Diesel and her hyper Border Jack Apollo, and a slew of farm animals that include alpacas, goats, and sheep.

Stina Nielsen is a New York based actress who has performed in Film, TV, Broadway, London’s West End, and at many American Regional Theaters. She has recorded over 200 audiobooks.

Tim Campbell is the Audie and AudioFile Earphones Award–winning voice of hundreds of audiobook titles in almost every literary genre.