Narrated by Emily Bauer, Spelunking Through Hell by Seanan McGuire is the eleventh book in the InCryptid series and shares the story of Alice Price’s journey to find her husband Thomas after he made a deal with the crossroads that saved her life. Answers, suspense, betrayals and more await you…. 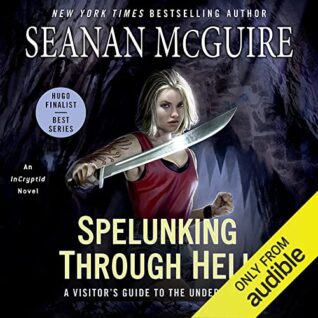 1. An intense feeling of deep affection; may be romantic, filial or platonic.

It’s been fifty years since the crossroads caused the disappearance of Thomas Price, and his wife, Alice, has been trying to find him and bring him home ever since, despite the increasing probability that he’s no longer alive for her to find. Now that the crossroads have been destroyed, she’s redoubling her efforts. It’s time to bring him home, dead or alive.

Preferably alive, of course, but she’s tired, and at this point, she’s not that picky. It’s a pan-dimensional crash course in chaos, as Alice tries to find the rabbit hole she’s been missing for all these decades—the one that will take her to the man she loves.

Who are her allies? Who are her enemies? And if she manages to find him, will he even remember her at this point?

It’s a lot for one cryptozoologist to handle.

I love this series from the characters to the creatures and started listening the moment I got my hands on the audio. All along, we have known the story of Alice and Thomas Price and her relentless journey to find him. I was so excited get their story. I must caution you, though, as with any long-standing fantasy series, it is best to listen to them in the order of release.

With the crossroads destroyed and clues given to her by contacts, Alice hopes to traipse further. This time, maybe she will find Thomas. Dead or alive, she needs closure or a miracle. Her last journey almost killed her, but she found information that changes everything. We also painfully learn how Alice has stayed so young. OMG… nope. Nope. Nope.

This felt like an interlude as we stepped away from cryptology and the Covenant, but I loved what we learned about the crossroads and what happened to Thomas, Alice and others. McGuire has a brilliant imagination as she swept us through dimensions. From allies to enemies and those in disguise, I was all in.

Alice is stubborn, brave, relentless, and fearless in the face of battle. We meet some new characters and find connections as we face down foe and learn the effects of previous storylines. Does Alice find Thomas? Can she make it home? I will leave you to discover those answers. I will tell you, I experienced every emotion under the sun and stayed up listening way past my bedtime.

Emily Bauer narrates and did a splendid job of capturing not only Alice but others from human to creatures. I’ve listened to the series from the beginning and think they are perfect in this format.

Seanan McGuire is a native Californian, which has resulted in her being exceedingly laid-back about venomous wildlife, and terrified of weather. When not writing urban fantasy (as herself) and science fiction thrillers (as Mira Grant), she likes to watch way too many horror movies, wander around in swamps, record albums of original music, and harass her cats. Seanan is the author of the October Daye, InCryptid, and Indexing series of urban fantasies; the Newsflesh trilogy; the Parasitology duology; and the “Velveteen vs.” superhero shorts. Her cats, Lilly, Alice, and Thomas, are plotting world domination even as we speak, but are easily distracted by feathers on sticks, so mankind is probably safe. For now.

Lauded as a prolific narrator by the Audiobook Publishers Association, Emily Bauer has a passion for truthful, honest storytelling and creating memorable characters across all genres. Emily graduated from New York University majoring in Theatre and Business. The recipient of multiple “Golden Earphones” , “Listen-Up Awards”, and Publishers Weekly starred reviews, she is well-known for her animation work on shows such as “Pokemon”, “Clifford”, and “Wallykazam”, as well as many of Miyazaki’s animated masterpieces, to name just a few. Among her over 300 audiobooks, recent favorites include the iconic ‘“Baby-Sitters Club” series as Mary Anne Spier, the beautifully tragic Beth in “Little Women”, The Incryptid Series by Seanan McGuire, and the Razorland Series by Ann Aguirre. Non-fiction work includes “Constitutional Grounds for Presidential Impeachment” and Lauren Mcgoodwin’s bestseller, “Power Moves”.

A Penguin's Quest by Scott McDermott