Please give a warm welcome to Sophia Rose. Today she is sharing the first novel in the Jake Paynter series, Dead Man’s Hand by David Nix. You’ll want to get your hands on this character driven western. 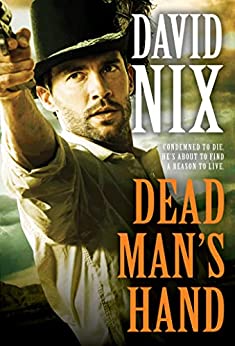 An action-packed historical western for fans of William Johnstone and Louis L’Amour.

Condemned to die, he’s about to find a reason to live.

Jake Paynter is a doomed man. Haunted by an abusive childhood and his participation in atrocities of the Civil War, he seeks the isolation of the Plains Cavalry as a white officer for an all-Black buffalo soldier troop. Now, he is in irons and certain to be hanged for killing his captain after refusing an inhumane order. Despite his best efforts to maintain isolation, he starts to make friends on his journey to trial. The people of the wagon train begin looking to Paynter for leadership, and he reluctantly falls into the role.

The opportunity to escape arises when the wagon train is attacked by bandits, but Paynter’s growing ties to the travelers compel him to stay. As his trial approaches, Paynter must lean on his friends for salvation, but the laws of the west are swift and harsh, and a grueling confrontation with his past is on the horizon.

A turbulent time and place where lawlessness runs wild and it takes people full of grit to survive let alone tame it. Carefully crafted backdrop and authentic historical work surround this character driven western action tale of a man’s redemption against great odds.

David Nix is a new to me writer, but one look at the blurb had me excited to try his rousing western in the spirit of some of my favorite writers.

The book opens with a shocking scene when a white lieutenant shoots his commanding officer and then takes off on the run.

Months later, one of his former black soldiers comes upon him in St. Louis and brings him back for army justice.  Jake has done some atrocious things in his past and is content to let justice prevail.  Gus was doing as ordered and he is there to ride escort along with a few army soldiers to bring him back to Ft. Bridger for trial.

They are to accompany a wagon train headed to Idaho.  The lead wagon is that of a Missouri senator’s son and daughter.  There is a mystery about what their wagon is carrying.  Ashley can’t stand Jake, but his sister is willing to see the good in Jake that he can’t see in himself.  He is a murdering black soul and he prefers to keep good people at a distance. The rest of the train led by a veteran trail driver and his half- Shoshone daughter are all farmers looking for a new opportunity.

Jake gets to know and care about the members of the wagon train and is determined that the professional killers hounding them for whatever the snooty Ashley hides in his wagon will not harm these people.  His experience fighting in the Civil War and on the frontier with his Buffalo Soldier unit stand him good.  His determination to destroy the enemy is personal when he realizes the killers’ leader is a demon from his past.  And, every day brings him closer to a court martial and the gallows.

Like any good western, there is a solid adventure plot thrumming through this book with desperate odds for the good guys and gals.  And, there is also a stalwart, tarnished hero who stands between the innocent and those who would harm them.

The author went the extra step and colored in the lines to add complexity to Jake’s character with a slowly-emerging backstory.  He didn’t stint on the side characters either.  Jake thinks his past deeds are too evil, but his current actions and his more recent actions speak loudly so that Gus, his former sergeant who came for him, Stacy Blue, the trail master’s daughter, Rosalind Ashley, the genteel senator’s daughter, and the emigrating families all look to him as not just savior, but friend to be counted on.  The characters were diverse and interesting depicting a cross-section of this period and place in the old West.  There were race and class struggles and references to true events.

I also enjoyed that the villains were truly vile and capable so that the conflict was intense and kept me riveted.  I liked that there was immediate danger, but also the slow build tension of knowing what awaited Jake at the end of his trail and wondering how that would turn out.  The author paced out the story well.  It had strong action, but also included time to develop characters, relationships, and give a strong nod to setting.

While the main conflicts were resolved, it was obvious there are some unresolved issues.

Since 2010, David Nix has self-published science fiction, traditionally published historical romance (as Sawyer North, sawyernorth.com), and is now publishing historical westerns through Sourcebooks. Though he has touched many genres, everything in his life has pointed toward westerns. He was born on a military base in Texas and grew up in Wyoming on the borderlands of the Wind River reservation. His love of western history and great western films led him down this path.

I live in Austin, Texas with my wife of 30-plus years, and have three grown children and grandkids within driving distance.

Other People's Ownership Signatures in My Books