I finally managed to read the Epilogues for The Beginner’s Guide to Necromancy series by Hailey Edwards. The Epilogues: Part II, How To Survive an Undead Honeymoon delivered a chilling mystery and Epilogues: Part III, How to Rattle An Undead Couple shares the birth of their firstborn. Old friends, laughs, shenanigans and romantic moments made these enjoyable.

Since these are epilogues and readers should really read the Beginner’s Guide to Necromancy before beginning them, I decided to do coffee pot reviews.

Coffee Pot Reviews are reviews written in the length of time it takes my coffee to brew. 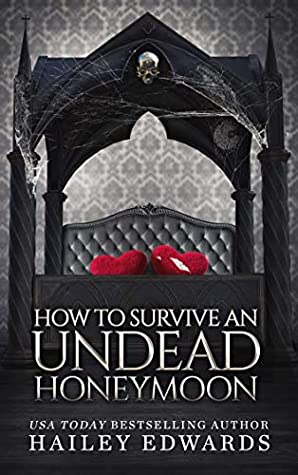 Nothing says romance like spending a long weekend at a haunted inn famed for sending its guests to the ER with scratches, bites, and fractures. Or so Linus thinks when he books a trip for Grier and himself to Oliphant House. As far as honeymoons go, the choice is nontraditional, but then, so is his bride.

Haunted history is one of Grier’s great loves, and she’s thrilled to discover Linus has given her a mystery to solve. Forget walks on moonlit beaches and sipping fruity drinks, Grier would much rather unravel the curse that’s plagued the Oliphant family for generations than pick sand from between her toes.

The resident spooks, however, aren’t happy with the newlyweds sticking their noses where they don’t belong. Between the missing persons, the dead bodies, and the secrets lurking in the basement, Linus and Grier start to wonder if they’ll survive their honeymoon.

How To Survive an Undead Honeymoon has us tagging along for Grier’s surprise destination honeymoon. Since neither can stay away from their positions for long, Linus books them a weekend at the Oliphant House. A bed-and-breakfast with a haunted history.

Every thirty years the Oliphant House awakens with activity and you guessed it, Grier and Linus arrive just in time. It was the perfect gift, as Grier loves this sort of thing. Linus booked the entire inn just for them. However, they might have gotten themselves in over their heads as the spiritual attacks are violent.

I loved seeing the subtle changes in Linus, now that the two are wed. They have the house to themselves until unexpected guests arrive. Two-guesses who can’t stay away even if it is her bestie’s honeymoon.

The haunting was interesting, as was the inn’s history. Edwards spun a tale that was chilling and entertaining. A clever mystery with a touch of romance and laughter made for the perfect escape. As always, I enjoyed spending time with these characters. 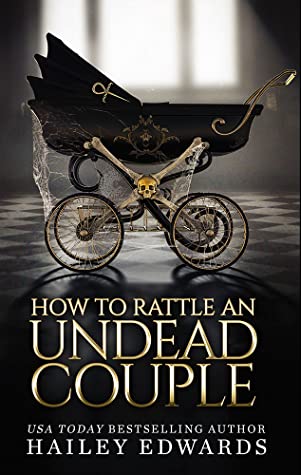 Grier is ready to smile for the cameras, rip open the presents, and finally taste that lemon chiffon cake, but it’s just not meant to be. The Grande Dame is MIA, which turns the big event into an even bigger search party. And that delicious cake? It’s going right back in the fridge.

While Grier doesn’t have the best relationship with her mother-in-law, she’s determined her child will grow up with one living grandparent or else. Even if it means wiggling into maternity jeans, putting on actual shoes, and waddling over to Lawson Manor to investigate the potential kidnapping.

Just as the investigation turns a corner, Grier pays the price for her stress. The baby wants out ahead of schedule, and it has a unique way of making its desires known. Unique and terrifying. Now the race is on to find the Grande Dame before the baby makes his or her first appearance.

What do you get when you cross a goddess-touched necromancer with an Eidolon?

Linus and Grier are about to find out firsthand. Now they just have to survive parenthood.

How to Rattle An Undead Couple delivered a hilarious, unique baby shower with cake, and a missing mother-in-law. Mystery, laughs and suspense await you in this tale.

Fair warning- never come between Grier and cake, especially when she is nine months pregnant. From swollen ankles to cranky moments, she was in rare form. This baby shower is the official baby shower befitting her title. It was organized for the benefit of her mother-in-law, The Grande Dame. When she is a no-show, the mystery leads to some surprises.

I devoured this all while drooling over talk of lemon chiffon cake. Poor Grier wanted in on the investigation and while she was kept in the loop, Linus and others handled the search. It was interesting, and I loved who partnered with Linus.

When the baby decides it wants to make an early appearance, I wasn’t at all surprised that this would not be a normal birth and Edwards did not disappoint. I think fans will be pleased with this final epilogue.

How to Survive an Undead Honeymoon & How to Rattle an Undead Couple by Hailey Edwards, the Epilogues to the #BeginnersGuideToNecromancy delivered mystery, suspense, & updates #urbanfantasy #bookreview Click To Tweet

Hailey Edwards writes about questionable applications of otherwise perfectly good magic, the transformative power of love, the family you choose for yourself, and blowing stuff up. Not necessarily all at once. That could get messy. She lives in Alabama with her husband, their daughter, and a herd of dachshunds.

About The First R and Related Enjoyments of John T. Winterich

Interview with Monica Murphy, Author of A Million Kisses in Your Lifetime