Ruby Fever by Ilona Andrews is the sixth book in the Hidden Legacy series and the third book featuring Prime magic user Catalina Baylor. Suspense, danger and swoon-worthy moments await you as the fate of Houston rests in Catalina’s hands. 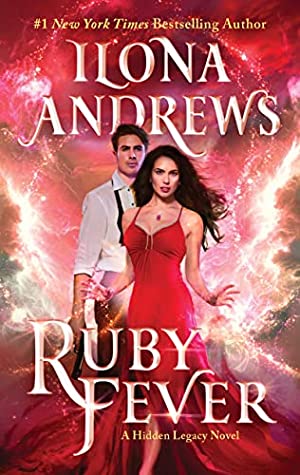 An escaped spider, the unexpected arrival of an Imperial Russian Prince, the senseless assassination of a powerful figure, a shocking attack on the supposedly invincible Warden of Texas, Catalina’s boss… And it’s only Monday.

Within hours, the fate of Houston—not to mention the House of Baylor—now rests on Catalina, who will have to harness her powers as never before. But even with her fellow Prime and fiancé Alessandro Sagredo by her side, she may not be able to expose who’s responsible before all hell really breaks loose.

I love this fictional family and the world that the Andrews’ have created. The house of Baylor purchased a new compound, and it was fun seeing them all together and claiming rooms before chaos reigned.

This is the third book in the Catalina and Alessandro part of the Hidden Legacy urban fantasy series. This book has it all as we address their overall story arc, deal with spiders, monsters, and threats not only to Houston, but to the House of Baylor itself. Ilona Andrews delivered non-stop action as our kick-ass heroine is tested.

For those enjoying the series, we are rewarded with answers, reveals and humor in the moments between epic battle scenes and confrontations. Secondary storylines involving family and the world gave the story depth and revealed secrets.

I adore Catalina and Alessandro. Their romance has not been easy but their chemistry, the snark, and oh-so sweet moments held me captive. Andrews writes characters you root for and want to visit again and again. The romance was served on the side and strengthened as we face Alessandro’s past and deal with Catalina’s present.

Even though the author has broken from traditional publishing; I hope she continues this series and gives us Arabella’s story. All the side stories within this series have me excite for more. I’ve read or listened to everything this writing duo has written and cannot wait for more!

Fans of urban fantasy, romantic fantasy and paranormal romance will want to grab all the books or audios in the Hidden Legacy series. You’ll love the Baylor family and the primes who love them.

Ilona Andrews is the pseudonym for a husband-and-wife writing team. author2sm“Ilona is a native-born Russian and Gordon is a former communications sergeant in the U.S. Army. Contrary to popular belief, Gordon was never an intelligence officer with a license to kill, and Ilona was never the mysterious Russian spy who seduced him. They met in college, in English Composition 101, where Ilona got a better grade. (Gordon is still sore about that.) Gordon and Ilona currently reside in Oregon with their two children, three dogs and a cat. They have co-authored two series, the bestselling urban fantasy of Kate Daniels and romantic urban fantasy of The Edge.

New Releases Tuesday: The Best Books Out This Week