The Recovery Agent by Janet Evanovich is the first in the Gabriela Rose Series, and the first book I’ve read by this author. Evanovich takes us on a Romancing the Stone adventure filled with danger, banter and adventure. 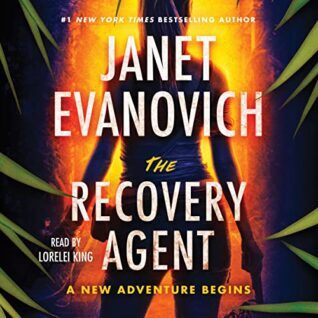 Lost something? Gabriela Rose knows how to get it back. As a recovery agent, she’s hired by individuals and companies seeking lost treasures, stolen heirlooms, or missing assets of any kind. She’s reliable, cool under pressure, and well trained in weapons of all types. But Gabriela’s latest job isn’t for some bamboozled billionaire, it’s for her own family, whose home is going to be wiped off the map if they can’t come up with a lot of money fast.

Inspired by an old family legend, Gabriela sets off for the jungles of Peru in pursuit of the Ring of Solomon and the lost treasure of Cortez. But this particular job comes with a huge problem attached to it—Gabriela’s ex-husband, Rafer. It’s Rafer who has the map that possibly points the way to the treasure, and he’s not about to let Gabriela find it without him.

Rafer is as relaxed as Gabriela is driven, and he has a lifetime’s experience getting under his ex-wife’s skin. But when they aren’t bickering about old times the two make a formidable team, and it’s going to take a team to defeat the vicious drug lord who has also been searching for the fabled ring. A drug lord who doesn’t mind leaving a large body count behind him to get it.

The Recovery Agent marks the start of an irresistible new series that will have you clamoring for more and cheering for the unstoppable Gabriela Rose on every page.

The Recovery Agent introduces us to Gabriela Rose. Divorced and living in SoHo, Rose supports herself by recovering lost items, treasures, stolen heirlooms and more.

Ravished by a hurricane, her family is in danger of losing their home & town to developers. Gabriela heads to the jungles of Peru in pursuit of the Ring of Solomon and the lost treasure of Cortez to save them. Aided by information provided by her grandmother, she will need help from her ex-husband, Rafer. Well, he has the map and won’t let her go alone.

I loved the back-and-forth banter between Rafer and Gabriela. Both are skilled in this field and they make a good team. Their chemistry is off the charts, and I had fun slogging through the jungle with them.

Gabriela is a kick-ass heroine with quite the skill set. She is knowledgeable in lost artifacts, has all the skills of a master thief, and is trained in martial arts and weaponry. She could go toe to toe with Lara Croft. Rafer has known Gabriela since elementary school. I warmed up to him more than her. Their interactions felt genuine and they know each other so well, you cannot help but want them united as a couple.

The story filled with boobie traps, drug lords, and villains seems ready for the big screen. It’s a light, fast moving, humorous adventure with its Indiana Jones and Romancing the Stone vibe, but it doesn’t quite reach that level. It is different and offers a pleasant escape from reality.

Lorelei King narrates and does a stellar job with the light tone, humor and numerous characters from Gabriela to the allies and enemies they make along the way. You can’t go wrong grabbing this for audio.

A solid start to the series that left me curious enough that I’ll grab the next in series when it releases.

Janet Evanovich is the #1 New York Times bestselling author of the Stephanie Plum series, the Lizzy and Diesel series, twelve romance novels, the Alexandra Barnaby novels and Trouble Maker graphic novel, and How I Write: Secrets of a Bestselling Author, as well as the Fox and O’Hare series with co-author Lee Goldberg

Lorelei is a multi- award-winning narrator of audiobooks, recording the works of best-selling authors Janet Evanovich, Darynda Jones and Patricia Briggs among others. In addition to numerous Audiofile Earphone and Audie Awards, she was voted Performer of the Year in 1999 and 2001 by the United Kingdom APA and Best Narrator of the Year by Audible.com in 2011. In 2017, she was honoured to be one of the first inductees into Audible’s Narrator Hall of Fame.

Plants for the Midwest to Add to Your Shopping List

Alesha Dixon - Beauty On Every Level