I enjoyed Camilla Sten’s atmospheric book, The Lost Village, last year, and I was eager to read her newest novel, The Resting Place. Sten delivered a spin-tingling, suspenseful thriller that kept me guessing. 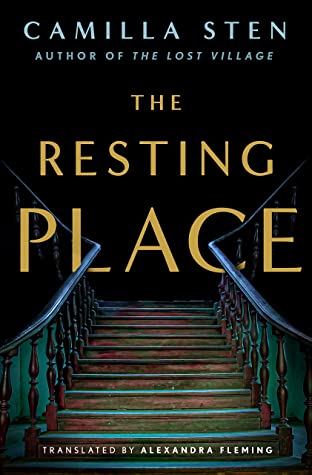 The medical term is prosopagnosia. The average person calls it face blindness—the inability to recognize a familiar person’s face, even the faces of those closest to you.

When Eleanor walked in on the scene of her capriciously cruel grandmother, Vivianne’s, murder, she came face to face with the killer—a maddening expression that means nothing to someone like her. With each passing day, her anxiety mounts. The dark feelings of having brushed by a killer, yet not know who could do this—or if they’d be back—overtakes both her dreams and her waking moments, thwarting her perception of reality.

Then a lawyer calls. Vivianne has left her a house—a looming estate tucked away in the Swedish woods. The place her grandfather died, suddenly. A place that has housed a dark past for over fifty years.

Eleanor. Her steadfast boyfriend, Sebastian. Her reckless aunt, Veronika. The lawyer. All will go to this house of secrets, looking for answers. But as they get closer to bringing the truth to light, they’ll wish they had never come to disturb what rests there.

A heart-thumping, relentless thriller that will shake you to your core, The Resting Place is an unforgettable novel of horror and suspense.

Eleanor suffers from prosopagnosia. The inability to remember or recognize a face, even those of her closest friends. Over the years, Eleanor has made links between hair cuts, facial hair and, of course, voices to recognize those around her. Her closest friends know to call her and share pictures if they get a haircut or change the color.

When she arrives at her grandmother, Vivianne’s apartments for their customary Sunday dinner, she is feeling resentful but duty calls. That is when she notices the door ajar just as someone rushes past her. Inside, she finds her grandmother murdered. Fast forward five months and Eleanor still suffers from nightmares and worries that every face is that of the killer.

When a lawyer contacts her, she is shocked to learn she has inherited Solhoga, a country estate. She and her live-in boyfriend Sebastien travel to the estate tucked away in the Swedish woods. They plan to meet the lawyer there and hopefully the estate manager who no one has been able to reach. She is surprised when she discovers her Aunt Veronika waiting for them.

An odd family history and the gloomy atmospheric Solhoga Estate set the tone for this chilling tale. Family secrets and resentments give way to truths as they unlock the door.

The author shares two time periods. Present day and 1965 via the maid Annushka’s diary that Eleanor discovers. The diary divulging the disillusions, pessimism and cruelties Vivianne, the madam of the house, made everyone endure.

Creepy closed off rooms, and the claustrophobic setting gave this a Noir vibe. The constant feeling of someone watching, flickering lights, a missing estate manager and a snowstorm all add to the foreboding. I found myself unable to put it down. What happened here? Why did Vivianne never mention the summer home? What doesn’t Eleanor know?

The tale was clever with plenty of twists, heartache and suspense as Eleanor moves closer to discovering the secrets buried here. Sten masterfully wove past and present to create a suspenseful thriller that will keep you enthralled.

The Resting Place by Camilla Sten delivered a chilling tale with a Noir vibe and remote setting. #SuspenseThriller #NewRelease #bookreview Click To Tweet

CAMILLA STEN has been writing stories since she was a young girl and is famously one of the most important sounding boards for her crime-writing mother, Viveca Sten. In 2019, she stepped out of her mother’s shadow and published the now internationally acclaimed, hair-raising novel “The Lost Village.” Rights for “The Lost Village” have been sold to seventeen territories around the world including film and TV. The book was one of seven shortlisted for the best translated crime award on ThrillZone.nl and was on the Polish Goodreads shortlist for The 2019 Best Book Award in the horror category. An ever prolific author, Camilla is already working on her next psychologically intense suspense novel, all while travelling the world and putting the finishing touches on the first part of her dark and atmospheric YA series.

Choosing the right plants for growing around patios