Sophia is back with another Treasure Hunters adventure. Come check out her thoughts on book six, Treasured Tears, by Kendall Talbot. Grab a cup of iced coffee and see why she loves this romantic suspense series. 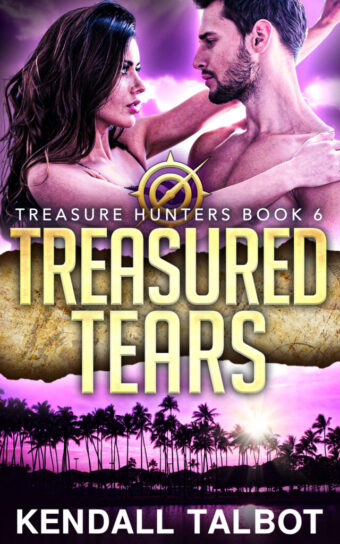 Will Archer’s quest to right a terrible wrong tear him and Rosalina apart forever?

Trapped in a treacherous do-or-die contract that threatens the lives of everyone he knows, Archer is determined to settle the score. But, forced to scuba dive in shark-infested waters, Archer and Jimmy find a deadly secret that was never part of the deal.

As the days tick down to the birth of their child, and Rosalina’s fiancé is missing half way around the world, she questions why they wanted to bring a newborn into their tumultuous lifestyle. And when a deadly nemesis crashes into their lives yet again, it seems not everyone will survive this time.

Could this tear Archer and Rosalina apart forever?

Treasured Tears is book six in the romantic suspense Treasure Hunters series, full of drama, danger, and passion. Get ready for new twists and turns in the glorious settings of Tuscany and the Caribbean Islands.

The last book, Treasured Hopes, left me long after the read with a racing heart and a spinning head. Archer and Jimmy forced to work a job for Diego, a South American criminal. Rosa, Nonna, Ginger and Alex were all back in Italy awaiting the baby and thinking they’re safe. And did Massimo really die when the plane went down? I wasn’t even out of the first few pages of Treasured Tears when I was back in the clinch of this adventuresome Treasure Hunting world and flying through the pages for what gripping, breath-stealing event would come next.  So much comes at the crew and the author doesn’t pull punches. So, this was one grandest finale of them all.

Rosa is four weeks away from giving birth and she is on the far side of the world at her Nonna’s home in Italy from Archer, who just missed his daily call. She knows he is hip deep in danger with South American criminals and she is forced to wait.

Like the evil Energizer Bunny, Massimo has survived to stab at Rosa and the others from the dark. His near-death experiences, losses, and survival only fuel his fury and need to destroy in the most painful way possible those he has made his enemies. And they don’t even know he’s coming for them this time.

Archer and Jimmy have to do this diving job for Diego because of the deal that kept their group alive in the last adventure.  He is separated from Rosa and when the stunner in that plane at the bottom of the sea and a shipwreck leaves him and Jimmy alone and at sea; he wonders if he can ever get to his Rosa. And will he ever find a treasure that they get to keep and not lose to a ruthless adversary?

The whole series is one long adrenaline rush and loaded with villains who just will not die, but the romance, exotic locales, and the lure of treasure make it one strong whole so that I crave each new entry- oh, and a chance to eat Nonna’s cooking. This is the last, and I had every plan of savoring it, but no, I couldn’t slow down to save my soul. There was no good stopping point once it got rolling, and I had to find out how they were going to pull through. The pace felt choppy at times due to quick changes in perspective and there being cut off scenes that get explained later.  I didn’t exactly get lost when this was happening, but I couldn’t get settled properly into the story, either.

While there is human drama involved, after all Archer gets Rosa miffed when he puts other matters ahead of them and the child they are awaiting and Ginger lied a few times among other examples, the focus of the book skates over this and gets straight to the surviving and fighting bits. It can be moderately gruesome and the villains are as capable and scrappy as the heroes so the action is riveting. Nothing is too easy and the wins are hard fought. There were closures to loose plot strings and a surprising late series character introduction and some emotional heart tugs, which paired with the taunt action plot, left me exhausted and limp after reading this last one.

In summary, this was the last of a must-read-in-order adventure romance series set in the Treasure Hunter world of points all over the world, colorful characters, a plot grips the reader, and I was eager to see how it would be brought to a satisfying conclusion and sad to see the last page when it did come after the time and emotions invested in this series. I would definitely recommend it to armchair adventure and romance junkies.

Treasured Tears by Kendall Talbot was another addictive installment in the Treasure Hunter World. #RomanticSuspense #SophiaRose #bookreview Click To Tweet

Kendall Talbot is a thrill seeker, hopeless romantic, virtual killer, and award-winning author of stories that’ll have your heart thumping from the action-packed suspense in exotic locations and the swoon-worthy romance.

Kendall has sought thrills in all 46 countries she’s visited. She’s abseiled down freezing waterfalls, catapulted out of a white-water raft, jumped off a mountain with a man who spoke little English, and got way too close to a sixteen-foot shark. When she isn’t writing, she’s enjoying wine and cheese with her crazy friends, and planning her next thrilling international escape. She lives in Brisbane, Australia with her very own hero and a fluffy little dog who specializes in hijacking her writing time. Meanwhile, Kendall’s two sons are off making their own adventures – look out world. Kendall’s book, Lost in Kakadu won the acclaimed title of Romantic Book of the Year 2014, and her books have also been finalists for Best

Plants for the Northeast to Add to Your Shopping List