Home » From Hollywood With Love by Scott Meslow
Books

From Hollywood With Love by Scott Meslow 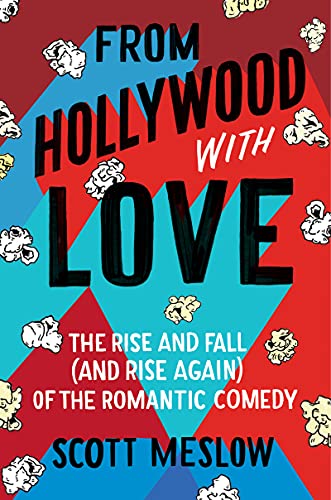 From Hollywood with Love

Fans of the romantic comedy genre will no doubt enjoy the nonfiction book, From Hollywood With Love: The Rise and Fall (And Rise Again) Of The Romantic Comedy. This book is a history of the “modern” rom-com in film starting with When Harry Met Sally (1989) and ending with To All the Boys I’ve Loved Before (2018). Along the way it discusses what a rom-com is and isn’t, why some work and some don’t, the difficulties faced by women of color and other under-represented groups in getting their stories on film, and the changes wrought by streaming services.

There are sixteen films that get their own chapters, plus interspersed sections on specific actors. It’s interesting to see why each film was chosen and how it either changed the rom-com paradigm or became a hit that remains unique, and why – in fact, thinking about why each movie gets the focus that it does was my favorite part of the book. Each chapter not only talks about a specific movie, but other films that competed with it, influenced it or were influenced by it. I was both entertained and informed by the discussions of how and why movies were made, all the changes they go through before making it to the screen, and what qualities seemed to be successful.

This is not a hard-hitting expose about the many kinds of erasures and injustices within Hollywood, but it does take the time to talk about how extraordinarily difficult it was for Waiting to Exhale (about Black women) and Something’s Gotta Give (about older White women) onto the screen. It also discusses why, for instance, Will Smith only made one romantic comedy (Hitch).

From Hollywood with Love is easy to read, it’s breezy, you can pick it up at any spot in the book, and it’s divided into a lot of short sections. This is not an academic book by any means. In addition to using conversational language, it’s fairly superficial in its discussion of the many problems in Hollywood. However, I did feel entertained, consistently interested, and at least somewhat informed and enlightened.

Above all, I found myself wanting to rewatch a lot of beloved romantic comedies and add some new ones to my watch list, which suggests to me that this book achieved its goal of reminding me of how delightful, interesting, and moving rom-coms can be.

An in-depth celebration of the romantic comedy’s modern golden era and its role in our culture, tracking the genre from its heyday in the ’80s and the ’90s, its unfortunate decline in the 2000s, and its explosive reemergence in the age of streaming, featuring exclusive interviews with the directors, writers, and stars of the iconic films that defined the genre.

No Hollywood genre has been more misunderstood—or more unfairly under-appreciated—than the romantic comedy. Funny, charming, and reliably crowd-pleasing, rom-coms were the essential backbone of the Hollywood landscape, launching the careers of many of Hollywood’s most talented actors and filmmakers, such as Julia Roberts and Matthew McConaughey, and providing many of the yet limited creative opportunities women had in Hollywood. But despite—or perhaps because of—all that, the rom-com has routinely been overlooked by the Academy Awards or snobbishly dismissed by critics. In From Hollywood with Love, culture writer and GQ contributor Scott Meslow seeks to right this wrong, celebrating and analyzing rom-coms with the appreciative, insightful critical lens they’ve always deserved.

Beginning with the golden era of the romantic comedy—spanning from the late ’80s to the mid-’00s with the breakthrough of films such as When Harry Met Sally—to the rise of streaming and the long-overdue push for diversity setting the course for films such as the groundbreaking, franchise-spawning Crazy Rich Asians, Meslow examines the evolution of the genre through its many iterations, from its establishment of new tropes, the Austen and Shakespeare rewrites, the many love triangles, and even the occasional brave decision to do away with the happily ever after.

Featuring original black-and-white sketches of iconic movie scenes and exclusive interviews with the actors and filmmakers behind our most beloved rom-coms, From Hollywood with Love constructs oral histories of our most celebrated romantic comedies, for an informed and entertaining look at Hollywood’s beloved yet most under-appreciated genre.

This book is available from:

As an Amazon Associate we earn from qualifying purchases.

We also may use affiliate links in our posts, as well.
Thanks!

Why I Love The Fresh Face Kit