Blackberries berries are wonderful to eat fresh off the cane and can be used to make incredible desserts, smoothies, and jam. They can also be frozen and thawed out for later use. Given the diversity of what can be grown in North American gardens, Scott Serrano and Allyson Levy strongly believe that black raspberry jam is the best of all preserved fruit.

The following is an excerpt from Cold-Hardy Fruits and Nuts by Scott Serrano and Allyson Levy. It has been adapted for the web.

For many years our gardens had a wonderful stand of wild black raspberries that declined over time as the berries were hit by a fatal bacterial disease called orange rust that causes the berry canes to slowly decline and die. We began to miss the flavor of this delicious annual fruit and started a new berry patch a safe distance away from the diseased blackcaps by growing the disease-resistant cultivated variety called ‘Allen’, and within a few years this berry patch started producing huge quantities of tasty berries. While cultivated blackcaps may not possess a flavor as intense as the wild fruit, it is very close, and the fruits are absolutely worth growing.

Growth Difficulty Rating: 2
Black raspberry canes are easy to grow and among the most productive fruiting plants, often producing berries a year after planting. But eventually brambles will require some management to deal with the rampant growth of the canes. They ultimately need to be pruned to facilitate easy berry harvesting. 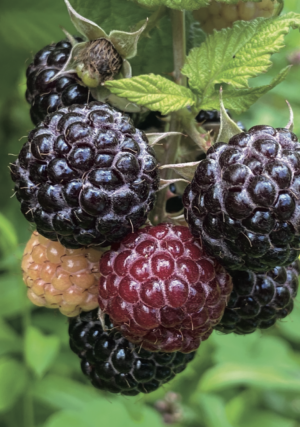 Taste Profile and Uses
The fruit is not an actual berry but a cluster of druplets or flesh-covered seeds clustered around a receptacle. Unlike a blackberry the torus (receptacle or core) is left behind when the fruit is picked. The berry size is about 1⁄2 inch (1.3 cm) round, but several bred varieties produce larger fruit.

Blackcaps possess a wonderful flavor that embodies the sweetness of a good red raspberry enriched by the sharp notes of a great blackberry. The berries are wonderful to eat fresh off the cane and can be used to make incredible desserts, smoothies, and jam. They can also be frozen and thawed out for later use. Given the diversity of what can be grown in North American gardens, we still strongly believe that black raspberry jam is the best of all preserved fruit. The chief drawback to the berry, and one of the main reasons it has not been as popular as the red raspberry, is a tendency for the fruit to produce larger quantities of seeds to a smaller proportion of fruit pulp than the red-colored sister species.1 When making blackcap fruit preserves, this problem is easy to alleviate by passing the fruit pulp through a metal strainer in order to remove a portion of the seeds. The berries are also filled with a wide range of nutrients and antioxidants, such as anthocyanins and phytochemicals, which are used by the body to help fight cancer and other adverse health problems.2

Plant Description:
A black raspberry bramble is composed of a series of shoots that sprout from the root system as canes (large arching stems), which grow between 3 and 12 feet (0.9–3.7 m) in length. The stems produce small curved thorns about 1⁄4 inch (6 mm) long that grow on canes, which start out light green then mature into a nice purple color that is often overlaid with a glaucous white bloom. The canes grow coarse, dark green compound leaves that are 2 to 4 inches (5.1–10.2 cm) long with serrated edges, arranged in groups of three or five leaflets that have a distinct silvery white underside.

Life Cycle of Berry Canes
All berry bramble stems are biennial. In the first year a primocane (new cane) grows from a bud in the roots into a long slender, curving stem with leaves but no flowers. In the second year the original cane, now called a floricane, develops a second flush of leaves with flowers that ultimately produce the fruit. After fruiting the floricanes will die at the end of the growing season. A cane system often thrives for eight to ten grow- ing seasons, and after this length of time the root systems begin to decline for several years until finally dying off. The longevity of berry brambles can be lengthened with a yearly addition of well-aged compost or leaf mulch to the soil surrounding the roots. Our patch has been productive for fourteen years. 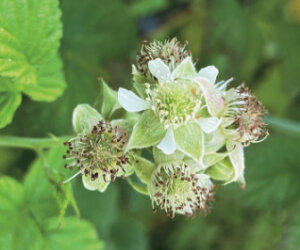 Flowers
Black raspberry canes produce small blossoms in clusters of five to fifteen flowers that are up to 1⁄2 inch (1.3 cm) wide. Each flower has five white petals above five long, greenish white sepals; these form around the center of the flower, which is filled with a large collection of stamens and pistils. Each of the flower’s pistils that gets pollinated can produce a tiny separate seed covered by juicy pulp, and all of those grow together to form a single edible fruit or drupe.

Pollination Requirements
The cane systems are self-fertile and often very productive, but because of the relatively small size of the fruit, it is generally necessary to plant several berry bushes together to increase fertility and to produce enough berries to really enjoy this quintessential summer fruit.

Site and Soil Conditions
Blackcaps grow in a wide range of soils but flourish to their greatest potential in nutrient-rich soil that is consistently moist and deep.3 They are found growing in forest environments and will produce fruit in partly shaded conditions such as four to six hours of direct sunlight, although a growing area that is in full sun exposure will be the most productive. Since berry canes produce shallow root systems close to the soil surface, they do not like competition from weeds and grasses. Soil that is constantly wet and soggy can seriously affect plants and make them more prone to pests that will ultimately destroy most of their root systems.4 Planting in a slightly wet area can be managed by growing berry canes on long rows of soil raised on a mound 6 to 8 inches (15.2–20.3 cm) above the ground. However, this may ultimately fail if the planting site is consistently too wet.

Hardiness
Blackcaps are often listed as zone 5 or to −20°F (−29°C), but there is a range of winter temperature tolerance in cultivars. Many varieties such as ‘Allen’ and ‘Jewel’ exhibit greater cold resiliency, sometimes listed as hardy to zone 4, and several varieties are more sensitive to colder temperatures and are rated as zone 6. 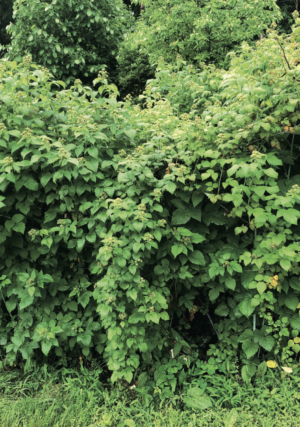 Fertilization and Growth
Berry canes will grow with neglect, but applying a layer of garden compost, well-aged manure, or leaf mulch each spring will help the roots stay cool, and result in larger berry harvests.

Propagation
Blackcaps are commonly propagated by tip layering— burying the tip end of the canes in soil and allowing new roots to form. After a growing season they can be separated from the mother plant in the fall and potted up with soil for future use.

Pests and Problems
Black raspberries are fairly easy plants to grow, but starting out with disease-resistant varieties that are sited in open light and planted in consistently moist and well-drained soil will alleviate many of the problems that affect blackcaps.5 If you have wild red or black raspberries on your property, try to locate your new plants a significant distance away from them, because viruses like orange rust (Arthuriomyces peckianus) can be passed from wild plants to new plantings. The biggest virus problems that affect the canes are anthracnose (Elsinoë veneta), mosaic virus, and verticillium wilt (Verticillium albo-atrum). When berries ripen on the canes, they can also be attacked by wasps, Japanese beetles, and some bird species. Gray mold can also be a problem on ripening fruit; it’s brought about by prolonged exposure to rainy weather and can result in heavy crop losses if this occurs just prior to the fruit harvest.

Growing berries in pots and containers

The Best Soil for Herbs—Grow a Fruitful Herb Garden