Home » How to Harvest, Store, and Cure Squash
Garden

How to Harvest, Store, and Cure Squash


Are you a squash newbie, afraid of ruining your crop due to rudimentary knowledge? Fear not! Expert gardener and squash-enthusiast, Carol Deppe, has some tried-and-true guidelines to make sure you reap the benefits of your hard work. So before you even think about cutting a stem, read this!

The following excerpt is from The Resilient Gardener by Carol Deppe. It has been adapted for the web.

When we harvest, we don’t want to break the fruit off at the stem, because if we do, the moist, juicy stem scar is vulnerable to mold and storage life drops. Instead, we cut or break the stem in between the fruit and vine so that there is a stub of stem on the fruit. Some varieties snap off easily; most, however, must be cut. Garden shears are the easiest way to do it. Most people will tell you to cut so that you end up with a 1- to 2-inch stub of stem on each fruit. I cut the stems to about to 5 inches long initially, then trim them to the final length of 1 to 2 inches after the fruits have been indoors drying out a few days. If the stem is shorter than 3 to 5 inches, I cut the vine on each side of the stem. Most varieties of squash should not be lifted or handled by the stem, because the fruit will break off. However, some varieties do have sturdy enough attachments to allow handling by the stems. There are always occasional fruits whose stems got knocked off in the field. Eat those first.

Books and articles about squash frequently speak in terms of an outdoor curing period. For example, after describing cutting the squash and leaving stem stubs, the Johnny’s Selected Seeds catalog says: “Cure in the field to dry and toughen skins by exposing fruits to sun for 5–7 days or so, covering in the evening if frost is likely. An indoor method of curing is to expose squash to 80°F–90°F (27°C–32°C) with ventilation for 3–5 days.” The “covering in the evening” assumes that you have cut the squash and consolidated them in a spot at the edge of the field (ready for loading into a cart or truck).

What people actually do with respect to curing, though, has more to do with their region and the year’s particular weather. Here in maritime Oregon, in squash-harvesting season, it is often raining. And when I am harvesting because a freeze is threatening, I want the squash safely out of the field. I don’t have any workable way of covering the amount of squash we harvest. I also don’t have any place that has temperatures of 80°F–90°F for indoor curing, either. My home is usually 60°F–68°F that time of year. That has to do for both people and squash. So the squash are always brought home at once and welcomed in with the people. There is a curing period, that is, a period after harvest in which the squash are allowed to sit and after-ripen before being eaten. But the curing temperature and conditions are the same as the rest of the storage. In other words, my idea of “curing” just amounts to not eating the fruit until it has been stored a certain amount of time.

I handle my squash gently. I never drop or toss them. I place them. I place big, heavy squash such as ‘Sweet Meat’ in a monolayer in the cart or truck, and I use old towels or sheets or rags between them to help cushion them for the ride home. I harvest the smaller squash such as the delicatas and ‘Sunshines’ into stacking crates, stacking them up and filling the crates. It doesn’t seem to hurt most small squashes to be in a crate buried under a foot of other small squash. I place squash in the crate so the cut stems or any pointy ends don’t jab into anybody. 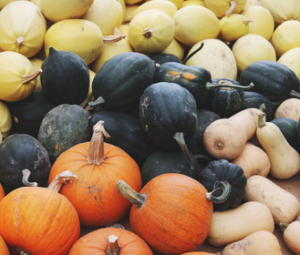 People often suggest washing the squash with water with some bleach in it. I don’t do that. We all come in from the field dirty. My house is dirty. What’s a little dirt among friends? Once home with my squash, I distribute them everywhere. Every room, every empty table, every bookshelf is improved by a diversity of squashes of many shapes and colors. Two walls of a back room lined with industrial-weight shelves take some of the bigger squash. Other big squash are lined up on the floor next to the wall all around the living room and fill every empty corner and replace every doorstop. Any area against the wall where you don’t actually walk should be lined with big squash along the floor. Furthermore, if you put tarps in the corners out of the way, you can make foot-high piles of delicatas there. With this attitude, it’s pretty easy to store a ton or two of squash indoors without much difficulty, even without the shelves. I place each big squash so that whatever spot it sat on in the field is now exposed to the air. The stacked crates of smaller squashes form a wall of squash.

After my squash have been inside for about three to five days, I turn each big squash so that a different part of the squash touches the floor and the first spot gets a chance to dry out. I also trim the stems with sheers to the final length of 1 to 2 inches. And I rearrange the small squash in their crates and stir up the piles of delicatas on the tarps on the floor.

Ideal temperature for storing squash beyond the initial curing stage is supposedly 50°F–55°F with a relative humidity of 50–70 percent. My household conditions of 60°F–68°F and 40–70 percent are supposedly not ideal, but they’re close enough. And perhaps they are ideal. My squash store as long as or longer than anyone else’s. The squash seem to like my methods.

The best squash flavor doesn’t develop until the squash has been fully cured or stored the right amount of time before being eaten. Generally, C. pepo varieties need to sit in my house for two weeks after harvest before they are prime. Most C. maxima varieties should sit at least a month. ‘Sweet Meat’ is best with at least two months. The squash can be eaten earlier, but they aren’t as sweet as they could be, and don’t have as much flavor or as much complexity to the flavor, or as much aroma. C. moschata varieties are said to need two weeks to cure, but I haven’t checked that out personally. It is clear that the curing time is temperature dependent. When my elderly mother was alive, I kept the upstairs part of the house warmer, and the upstairs squash cured and were ready to eat faster. It took the pepos only about a week, and the ‘Sweet Meats’ just a month.

When a squash tastes somewhat starchy instead of sweet, it is usually a curing problem. The squash was probably eaten before its time. When a squash isn’t starchy but has thinner flesh, less flavor, or less sweetness than expected, it is generally because it was picked immature or was poorly grown.

How to Plan the Best Garden Ever

What Does It Even Mean?

Reader Question - The book where she's been dreaming about since childhood and as an adult, he ends up being her doctor!

10 Books to Gift the Homesteader in Your Life