As much as we love to drizzle (or drown, let’s be honest) our pancakes in maple syrup, you may be surprised to learn that a variety of drinks are made with tree sap, with results that will far surpass your typical sugar buzz.

Several companies have ventured into the world of sap related alcoholic beverages. From maple mead to maple beer, and sap ale to birch wine, these maple beverages are sure to spur your creativity, whether you are a beginning home-brewer or a budding entrepreneur.

The following excerpt is from The Sugarmaker’s Companion by Michael Farrell. It has been adapted for the web. 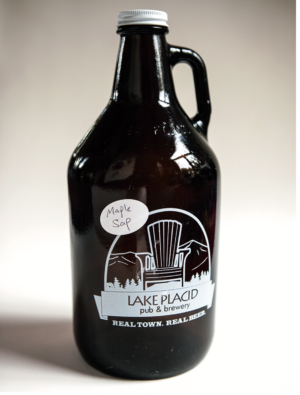 The Lake Placid Pub & Brewery has had great success in their experiments with maple sap ales. Photo by Nancie Battaglia

Making beer from the last run of sap is a forgotten tradition that is now making a comeback. Many years ago, rather than making really dark and potentially off-flavored syrup from the yellowish, bacteria-laden sap at the end of the season, some sugarmakers used this sap to brew a strong beer. They would boil it down partially and then add yeast, hops, and perhaps some raisins or sugar, then stick it in a barrel for a few months until it was ready. The tradition of sap beer was popular enough that Vermont artist John Cassel recorded a song all about sap beer in the 1970s.

Kevin Lawson specializes in small batches of unique, fine beers at his Sugarhouse Brewery in Warren, Vermont. He has brewed beer with fresh sap, but his preferred method is to use the partially boiled-down sap that comes off the evaporator at the end of the season. Many sugarmakers will chase the last of the syrup out of the pan by feeding in permeate or water when there is no more sap to boil.

Once the contents of the evaporator become diluted to the point that it doesn’t make sense to keep boiling, many sugarmakers will just dump the remaining contents. When Kevin heard about this, he asked a couple of sugarmakers to skip this process altogether. When there is no more quality sap to boil, they simply drain the pans and bring the contents to Kevin. With everything mixed together, the sugar content usually ranges between 10 and 14. 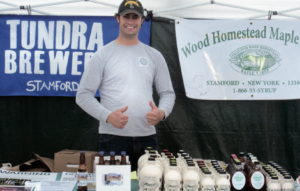 Mark VanGlad of Tundra Brewery produces a MaPale Ale with the maple syrup, grains, and hops grown on his farm in the Catskills. Because he produces all the ingredients himself, he is able to sell the majority of his beer at producer-only greenmarkets in New York City. Photo courtesy of Donna Wessel

Whereas maple sap ales can only be made for a brief period every year, beers that include maple syrup can be brewed year round. The microbrewery business in the United States has been exploding in recent years with a focus on small batches of unique beers. By using just a small amount of maple syrup, you can make a slightly sweet beer that tastes great and has excellent marketing appeal. This trend seems to be catching on, as there are a number of breweries that now include a maple beer in their assortment of craft brews.

Sam Adams, one of the largest craft breweries in the US, goes through a lot of maple syrup when making their Maple Pecan Porter. Although I doubt anyone along the lines of Budweiser will ever be brewing with pure maple, there are over 2,000 microbreweries in the country, so if you have one near your sugaring operation, see if they want to use your syrup for a seasonal special. Maple beers seem to be especially popular during the autumn when maple leaves are at their peak colors; they should become even more popular in March when the sap is owing throughout the Northeast.

Although many of us have probably heard of birch beer, few people actually know what it is. Historically, the sap from black birch (Betula lenta) trees was used to produce a non-alcoholic, carbonated beverage similar to root beer. There were also some regions that created alcoholic versions of the product, but this was the exception rather than the norm. The vast majority of birch beer on the market today uses artificial flavoring and sweeteners to create a carbonated soda with a unique flavor reminiscent of wintergreen. Some manufacturers claim that they use birch oil that has been distilled from the sap of birch trees, though this seems highly unlikely.

I suspect most of the flavoring agents are chemically synthesized or come from the bark and other parts of the tree rather than the sap.

The big opportunity that I see with birch beer is using birch sap to replace water in regular beer recipes. Although there is confusion over what birch beer actually is, the name is common enough that it invokes people’s curiosity. Using clear, fresh birch sap from the beginning of the season in lieu of water allows brewers to create a unique “birch beer” that has excellent marketing appeal. The birch sap probably won’t change the flavor of whatever beer is made with it, but since birch sap is a spring tonic full of minerals and nutrients, it does make the beer a bit healthier than your standard beer and provides an excellent marketing angle. The Lake Placid Pub & Brewery used 360 gallons of our birch sap to create a birch beer in 2013; it was very successful, and they are already looking forward to doing it again next year. 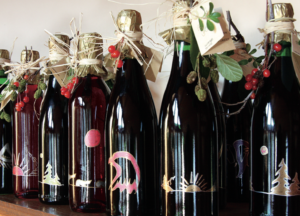 There are several companies throughout the world using birch sap as one of the main ingredients in wines. One of these is Sapworld, which is owned and operated by Craig Lewis in Newfoundland. In addition to other birch-derived products, he has developed and copyrighted Springwine, aka Lady of the Woods. Its marketing appeal is based on the fact that he uses birch sap from the pristine forests of Newfoundland that is full of minerals and nutrients. Sugar is added to the birch sap until the sugar content is high enough for fermenting into wine. According to their marketing materials, this wine . . . “shows clear and bright in the glass; provides a delicate fragrance of soft apple and pear; sits well in the mouth with pleasant acids balancing the evident fruit sugars; persistent flavors of ripe pear, Mandarin orange, and Delicious apple blend harmoniously and without bitterness.” This certainly sounds good, and with the natural origin of birch trees, it makes for a winning combination.

Boreal Bounty is another company from the Manitoba region that specializes in birch wine and other boreal forest products. Started in 2005 by Doug Eryou in conjunction with the D. D. Leobard Winery of Winnipeg, they developed a wine called Tansi derived from birch sap. In addition to their standard birch sap wine, they also have a wide range of products that use the extracts of other boreal trees and plants. Their list of wines includes birch sap mixed with cherry, lingonberry, sea buckthorn, cranberry, and Saskatoon. They also utilize the sap of boxelders— the only species of maple growing in Manitoba.

While touring different sugarbushes in Quebec a few years ago I met Alberto Milan, the owner of a Canadian wine company. This was during the height of the recession when many businesses were suffering, yet Alberto’s sales were soaring. He provided us with a brilliant rationale for why he decided to focus on using maple for wine rather than as a pancake topping. According to Alberto, “When the economy is good, people have lots of money and they like to celebrate and drink alcohol . . . and when the economy is bad, people are upset and like to drown their sorrows by drinking alcohol.” So no matter what happens with the economy, the sale of alcoholic beverages continues to grow. Sales have been particularly strong in China and are now expanding into the US market through a distributor under the name of Maple Connoisseur. His company produces a table wine, sparkling wine, and ice wine all made with pure maple syrup. The process involves diluting the syrup with water and then starting the fermentation process until most of the sugar is consumed by yeast. Venerable is the table wine and is not nearly as sweet as you would imagine it to be, though the ice wine definitely packs a punch. 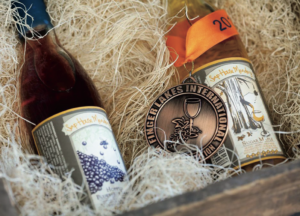 Two of the most popular mead varieties produced with maple syrup by the Saphouse Meadery in New Hampshire. Photo courtesy of Cris Dow

Sap House Meadery was started in 2010 by two cousins, Ash Fischbein and Matt Trahan. Both worked in the restaurant business for many years, but had grown tired of cooking and wanted to do something different. Since they were both avid homebrewers, they decided to start making wine with local ingredients from their region. There aren’t any grapes in New Hampshire, but there is certainly a lot of maple syrup!

After visiting 35 sugarhouses all over the state, they were especially impressed with the operation at Windswept Maples and started to get their syrup exclusively from them. Most of their meads are not strictly made with maple syrup, but rather use a blend of maple syrup with honey—this is known as an acerglyn. Many people expect maple mead to be excessively sweet, and depending on how it is made, it certainly can be.

However, by properly controlling the sugar concentration and fermentation, it is possible to make maple-syrup-based meads that are relatively dry or semi-sweet. After years of experimentation, Ash told me he found the perfect balance that seems to work for them. They have already won awards for their signature Sugar Maple mead at the International Wine Festival in the Finger Lakes of New York. They also produce a variety of other meads utilizing local ingredients, including their Hopped Blueberry Maple, Blackberry Maple, and Peach Maple.

Maple syrup can be distilled into hard alcohols or can be added to finished products as a flavoring agent. Craft distilleries are becoming increasingly popular as many states enact legislation that supports these operations, rather than forbidding them as they have in the past. Since maple syrup is so expensive, it makes much more sense to use it as a flavoring agent rather than simply as a source of sugar for distillation purposes. However, with the increasing amount of off-flavored, commercial-grade syrups being produced at the end of the season these days, I suspect that this could change. Thanks to advances in vacuum tubing and spout designs, many sugarmakers are still gathering plenty of sap at the end of the season when the syrup being produced is no longer fit for human consumption. This type of syrup is perfect for distilling into vodkas and other spirits, since none of the off-flavor will come through in the finished product. You can then add some high-quality syrup for flavoring to have a 100 percent pure maple spirit.

How to Build An Aviary

How to Stop Cats from Pooping in the Garden

Grow Your own Pansy & Viola Plants from Seed