My Sentimental Library: About Table Talk


I really, really thought that writing this month’s post would be a breeze. Table Talk would be what I was going to write about.  I would  define what Table Talk meant.  And then I would discuss and display some of the Table Talk books that I have in my library. 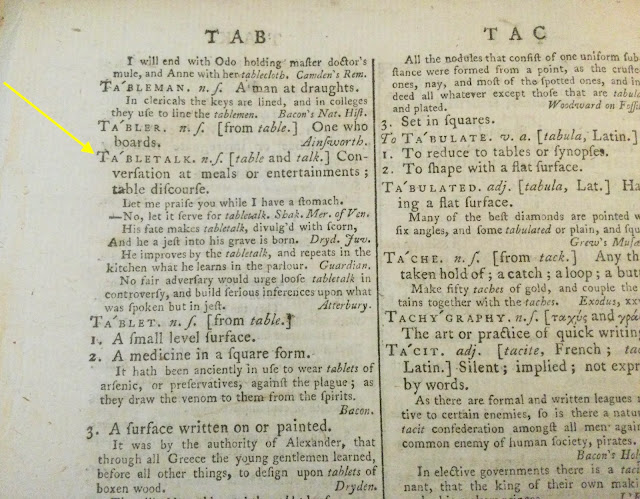 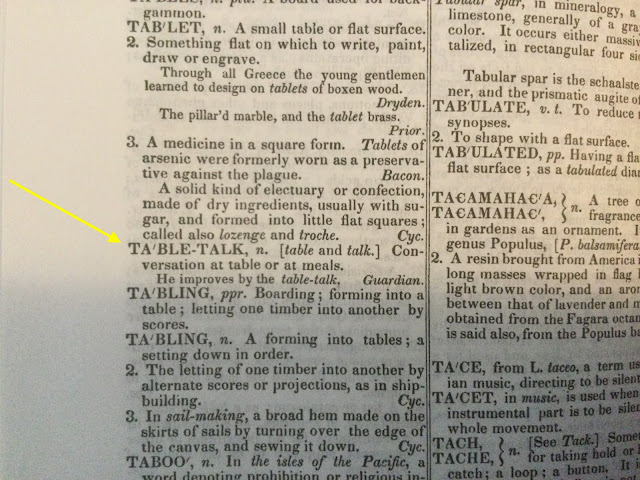 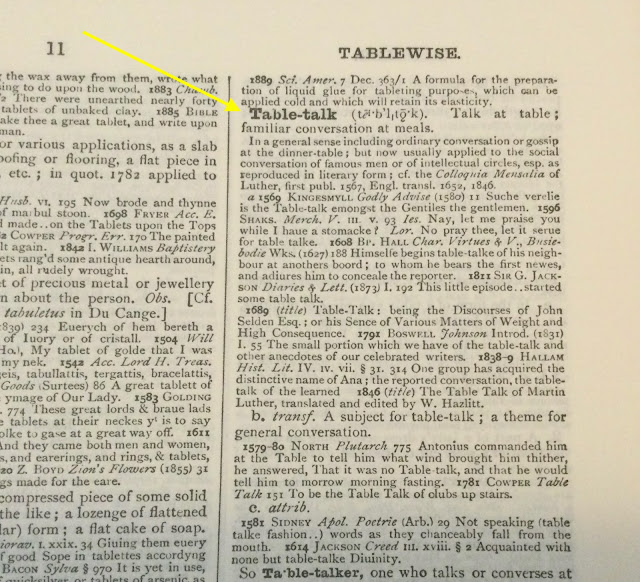 The OED cited Hallam in its listing.  And what Hallam wrote made me nervous.

One group has acquired the distinctive name of Ana; the reported conversation, the table-talk of the learned. 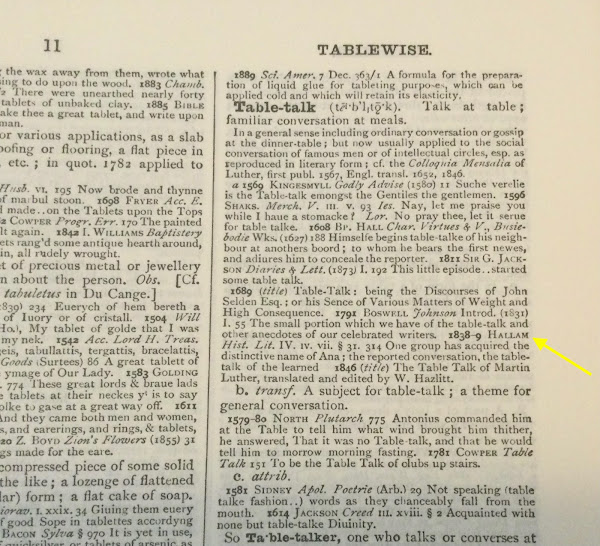 I have Hallam’s book that the OED cited, and I immediately read the entire passage that he labelled as The Ana.  Hallam was discussing the miscellaneous literature of France of the sixteenth and  seventeenth centuries, and specifically mentioned the other groups of miscellaneous literature: the memoirs, the letters, the travels, the dialogues, and the essays of the French.  In discussing the group, The Ana, Hallam mentioned The Menagiana, and said it was “full of light anecdote of a literary kind….”  If I understood this correctly, Hallam considered anecdotes to be in the same vein as Table Talk and Ana.   To me,  all the Anas that I read contained more than just Table Talk or conversation.  They contained anecdotes and other literary information. 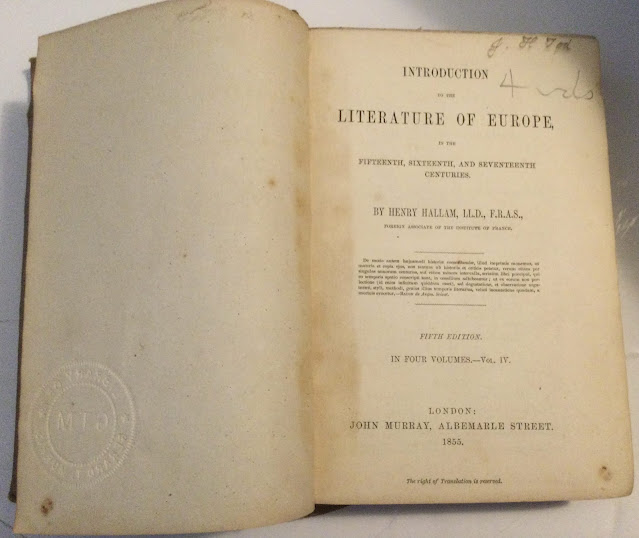 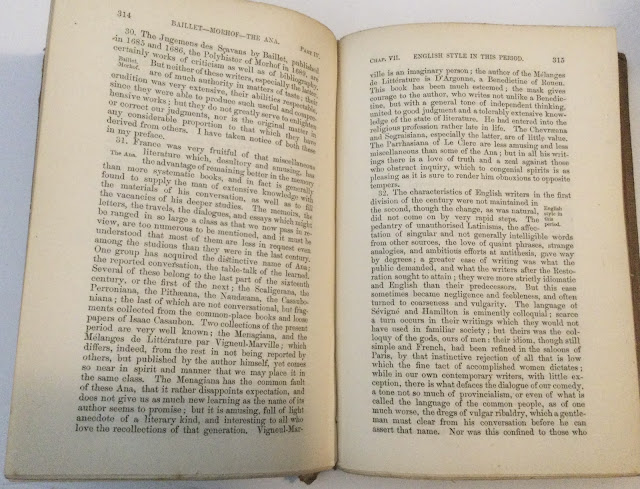 I was looking right down a rabbit hole now and really, really needed help.  So I got John Carter’s ABC for Book Collectors down from the shelf, and sought his definition of Table Talk.  I went to T and the first word beginning with the letter T that Carter defined was Tail.  He did not define Table Talk in his book!  After I few long minutes, I finally got up the courage to turn the pages of Carter’s book and see if he defined Ana.  I went from Abbreviations, to Adams, to Advance Copy, to Advertisements, to A La Grecque, to All Published, to American Book-Prices Current, to Americana, and finally, to Ana. 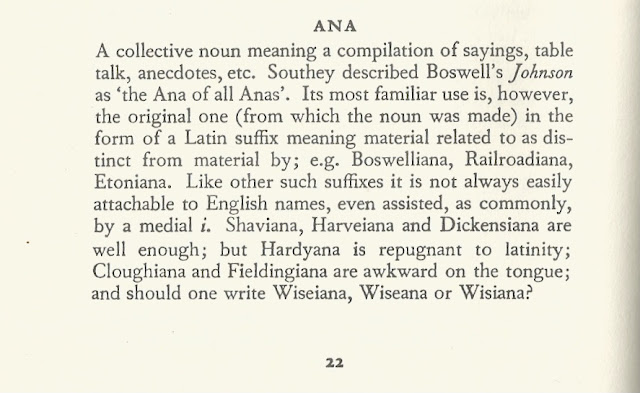 Well!  I sure am glad that Carter got it right!  According to Carter, Table Talk is just a part of Ana.  And Ana also contains sayings, anecdotes and etc.

I wondered what the  Library of Congress had to say about Table Talk and Ana. 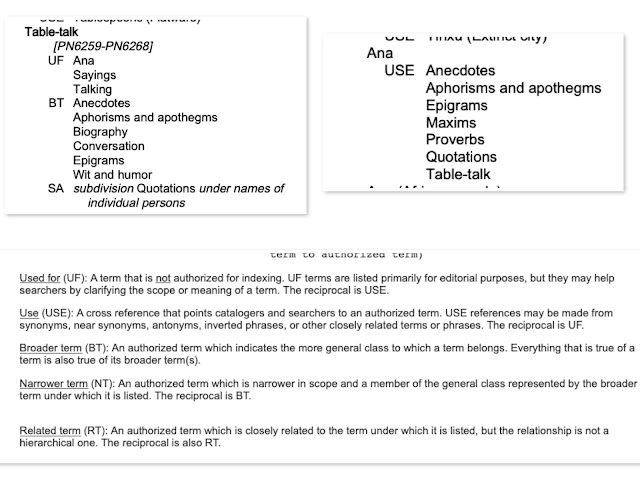 I was kind of glad that the LOC did not authorize Ana for indexing Table-Talk. But it did surprise me that the LOC did not provide the Use terms for Table-Talk – something that pointed me in the right direction to know what was best to use for Table-Talk.  Perhaps there was nothing better to use than the general classes that Table-Talk belonged to.  The LOC listed them under BT, which stood for Broader Terms.  I believe the general classes were listed in some kind of descending order of importance: Anecdotes, Aphorisms and Apothegms, Biography, Conversation, Epigrams, and Wit and Humor.

The LOC did, however,  provide useful information regarding indexing Ana! In descending order, the LOC suggested I use Anecdotes, Aphorisms and Apothegms, Epigrams, Maxims,Proverbs, Quotations and, as a last resort, Table-Talk!

In my quest for determining what Table Talk actually is, I came across a book that was edited and published in  Edinburgh by Alexander Hislop.  The title of the book was Adversaria, Ana, and Table Talk: A Literary Commonplace-Book.  Google Books lists 1869 as the publication date, but Hislop died in 1865, so I can’t vouch for the accuracy of the date of publication.  What I can vouch for is what Hislop says about Table Talk in the Preface of his book! 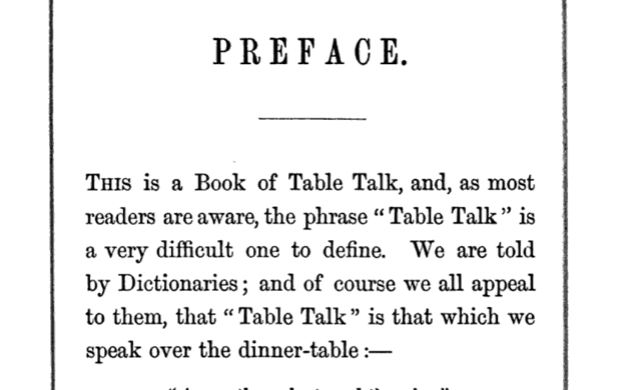 I shall take Hislop’s words to heart and refer to the Johnson/Webster definition of Table Talk: conversation at meal or at table. Therefore,  I will discuss and display books in my library that have the words Table Talk in their title, or books that have the word Table in their title and contain conversation or discourses.  There are eight books in my library that qualify  under this criteria.  And the first one is the Table-Talk of John Selden.

I have a copy of Edward Arber’s English Reprints, which contains Selden’s Table-Talk 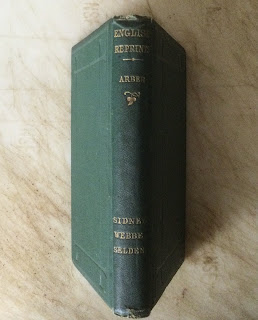 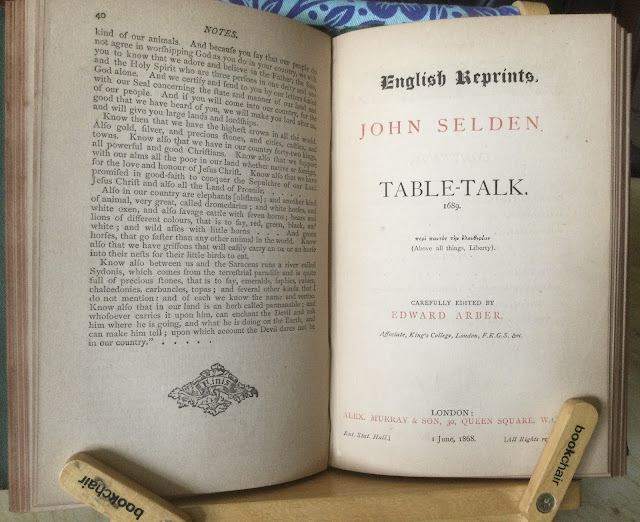 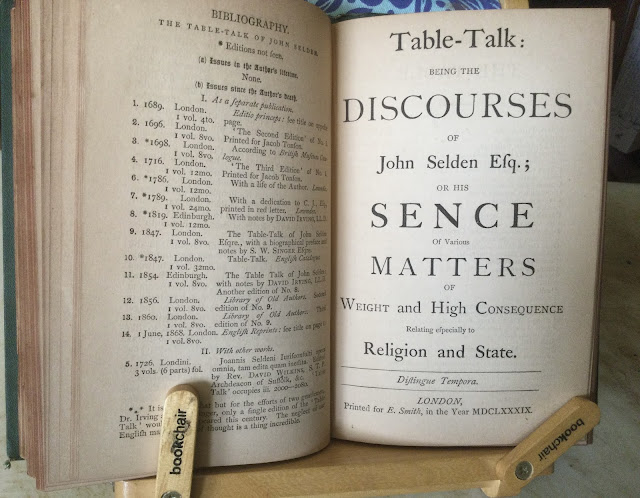 Selden’s Table Talk was not what I expected. It was not conversation that took place at dinner or around a dinner table for that matter.  It was based on a different kind of table. 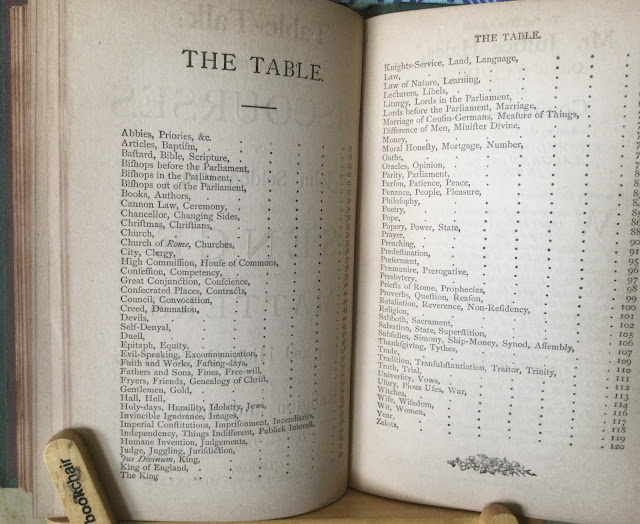 That sure looks like a Table of Contents to me!  Nevertheless,  the Table lists Selden’s discourses that his amanuesis, Richard Milward, reportedly heard.  However, Selden’s biographer, David Wilkins,  disputed their authenticity. 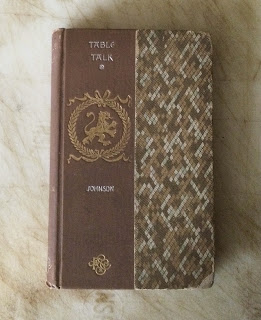 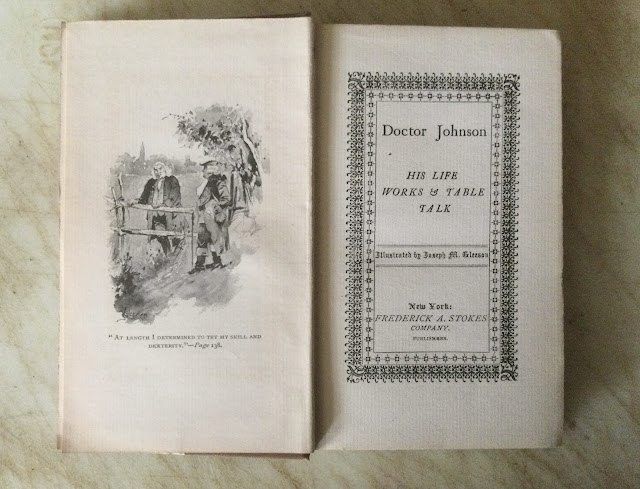 James Macaulay, a periodical editor in London, edited this book for Frederick A. Stokes in 1893.   My copy was formerly owned by D. S. Pithers with his Johnsonian bookplate.  And yes, it contains Johnson’s conversations. 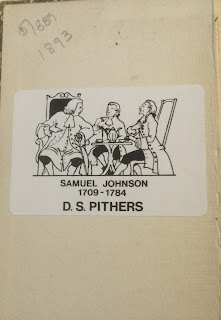 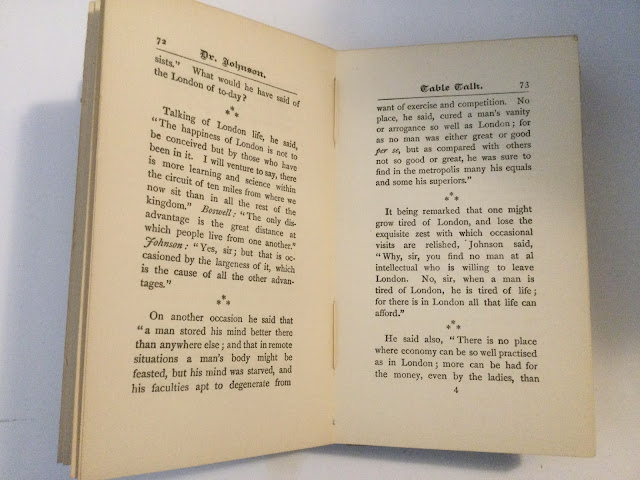 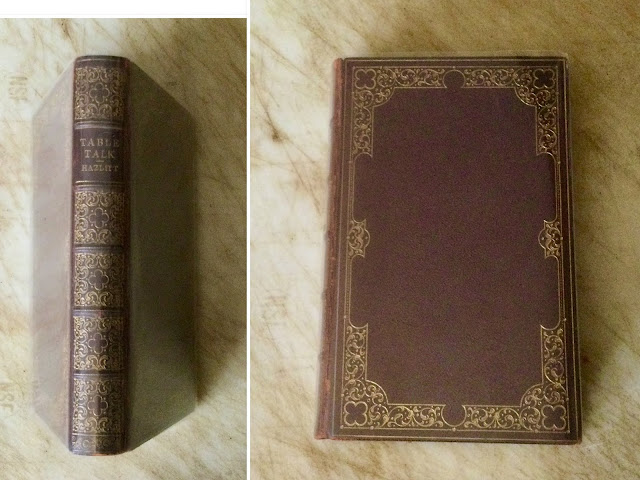 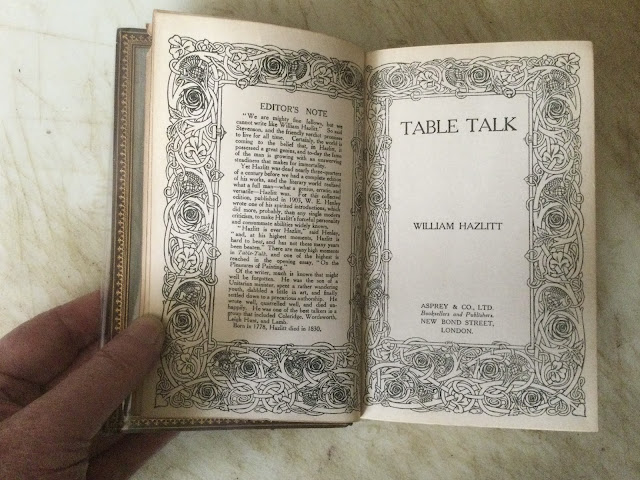 The prestigious firm of Asprey & Co. bound and published this book around 1909.  But I think calling this book a Table Talk book is stretching it a bit.  The contents themselves are listed as essays.  Therefore, it is simply a book of essays. But an excellent book of essays at that. 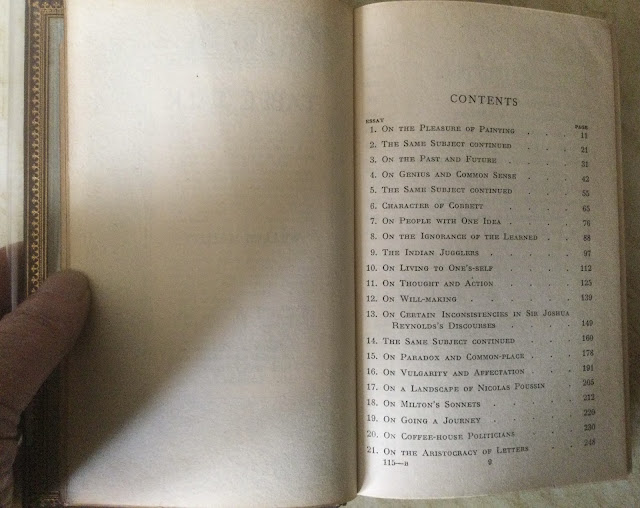 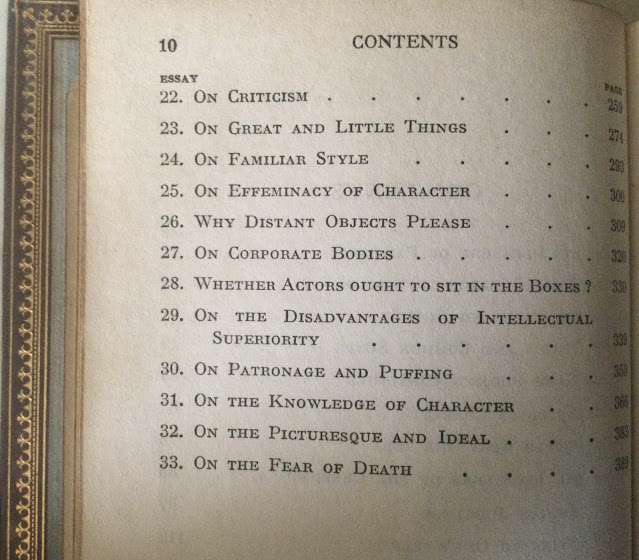 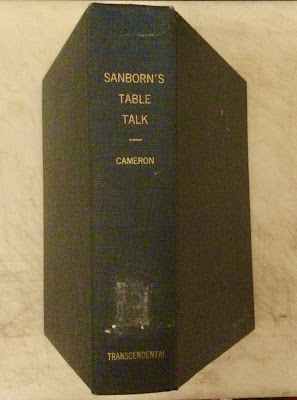 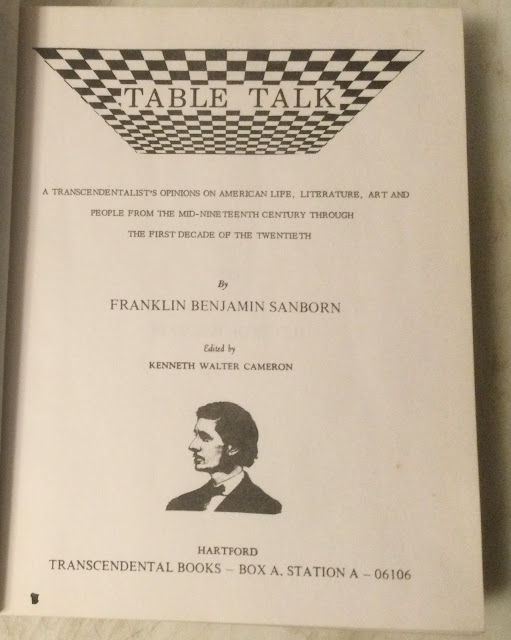 I have to use my imagination to classify this book as a Table Talk book.  Sanborn was a feature writer for the Springfield Republican and the Boston Daily Advertiser, and his so-called Table Talk dates from1869 to 1918.  Kenneth Walter Cameron, the editor of this book, says that the book consists of personals and obiter dicta that Sanborn usually placed at the end of his feature articles and book reviews.  His column in the Boston Daily Advertiser was named “The Breakfast Table,” and that could be where Cameron got the Table Talk title from.  Or maybe it was because readers read his articles when they were sitting at the breakfast table?  I have to say, though, that the book is well worth reading, from Sanborn’s involvement with John Brown to his opinions of the authors of the day.

5.  The Autocrat of the Breakfast Table 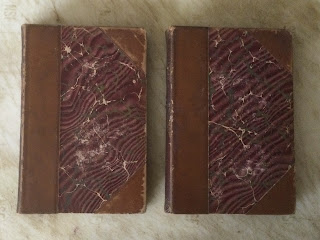 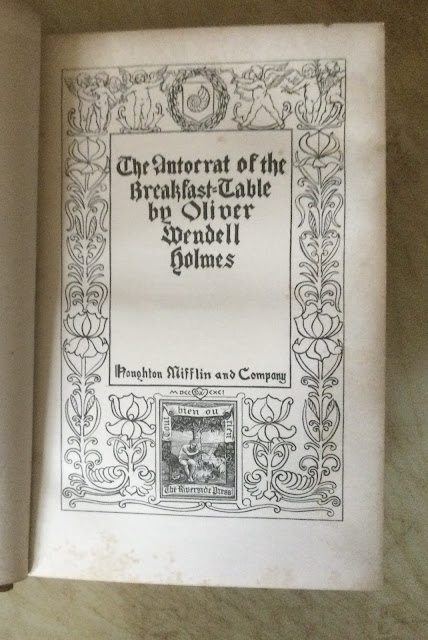 I could never get into this novel by Oliver Wendell Holmes.  But it is conversation that takes place at a Breakfast Table….

6.  At the Library Table 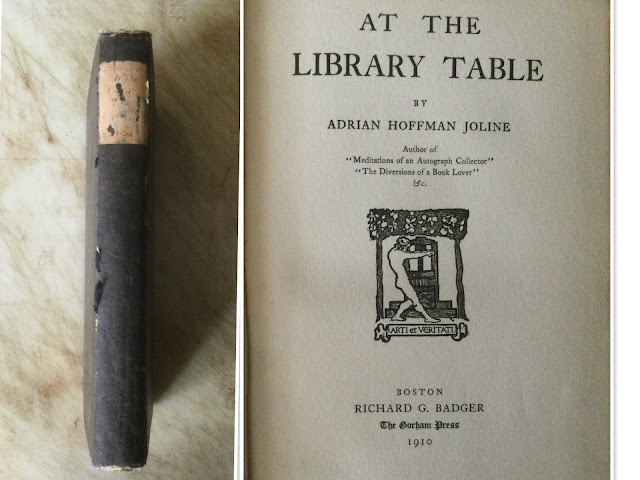 This book qualifies as one of my Table Talk books not just because the word table is in the title, but because, in some of the passages, Joline appears to be conversing while he is sitting at his library table.

Sitting at the library table and letting my eyes wander with affection to the adjacent shelves, I try to fancy who buys the multitudinous books of memoirs and reminiscences, of literary, dramatic, and political gossip, which are poured so profusely from the English presses (p7).

Most of us find that as the number of years increases we are apt to spend to pass more and more time at the library table, within easy reach of the shelves.  I have been charged with believing that books are “the chief things in life;” I admit that they are not and ought not to be that, but I see no reason why we should not be allowed to enjoy them as we would any other innocent pleasure in due moderation (p14).

I wrote about Adrian H. Joline in my July 2017 post to My Sentimental Library blog.
7.  More Books on the Table 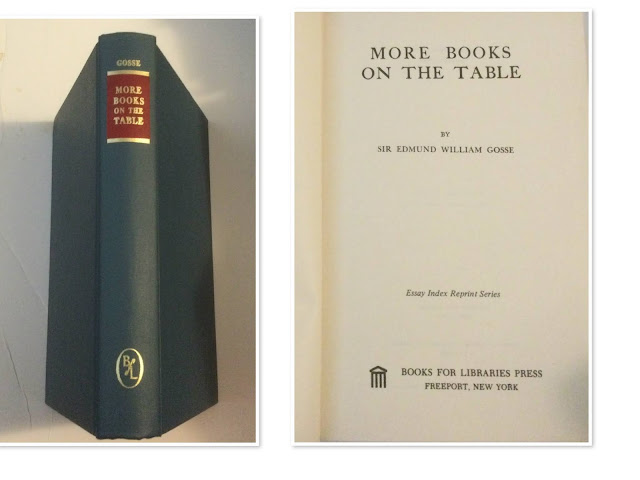 Books continue to be heaped upon my table, and they are flowers that tempt into the sunshine bees, which I call memories, hived in the course of sixty years of indiscriminate and insatiate reading. The Young Anarchist placed his trust in books, and we are told that he was disappointed.  The fault must have lain, I think, in himself and not in literature.  I have forgotten who Lucas de Penna was, but I love him for saying that books were to him “the light of the heart, the mirror of the body, the myrrh-pot of eloquence.”  So they are to me, and more so the older I grow.  When the infinite variety and charm of them fail to enchant me, it will be time for me to “cease upon the midnight with no pain.” (vii)

8.  Around the Library Table: An Evening With Leigh Hunt 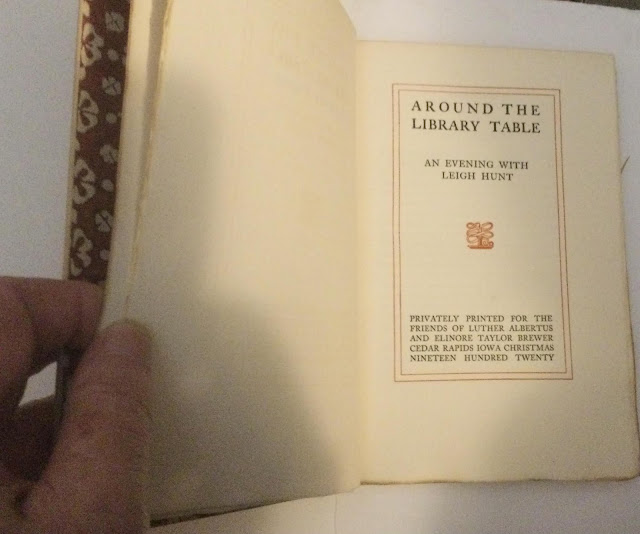 So at this time we ask you to gather around the big table in our library where we may visit informally, and talk of the fellowship of books, and look at some Hunt rarities. We are hungry for your companionship, and while, possibly, your presence is not essential to complete our happiness, for we have friends on the shelves that are a solace to us at all times, yet we want you to know that we hold you in great esteem (p10).

Interview with Nurit and Rami Harpaz, Authors of Letters From Captivity

We Hunt The Flame by Hafsah Faizal – Right Writing Words