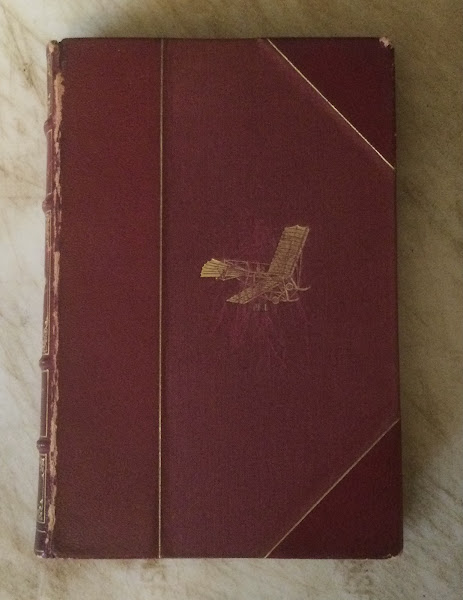 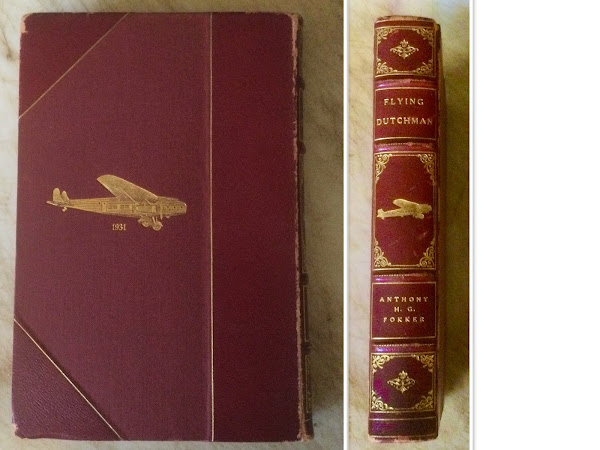 I didn’t realize how special my copy of the special edition of Flying Dutchman was until I read the statement on the limitation page. 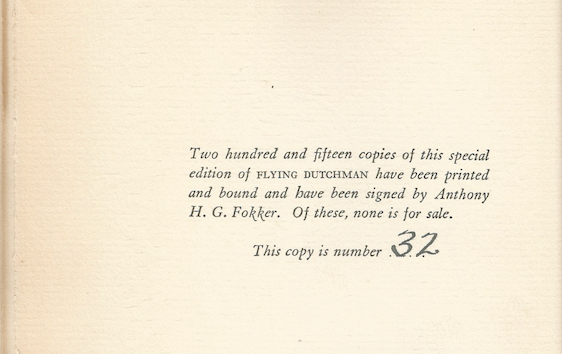 “Two hundred and fifteen copies of this special edition of Flying Dutchman have been printed and bound.”

That is true per se. But I was soon learned that more information should have provided in that statement.

I took a dive into the web via Google. I searched for signed and unsigned copies of the special edition. And boy was I surprised with what I learned!

Fokker did not sign copy no. 42, which an Australian bookseller currently has listed for top dollar on the Biblio website. The binding is the same as mine. 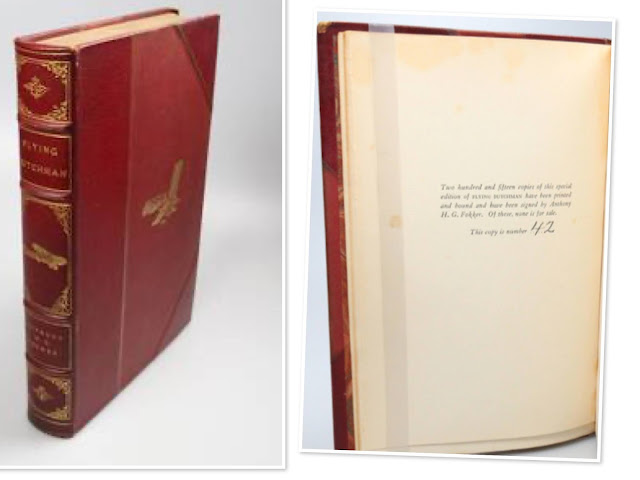 Fokker signed and inscribed copy no. 148 on the frontispiece page. That copy was sold on eBay and listed on the Worthpoint website. I don’t subscribe to Worthpoint so I can’t tell you when the eBay auction was held.   What did catch my eye, however, was that copy no. 148 was bound in full leather and with no gilt airplanes on its covers! 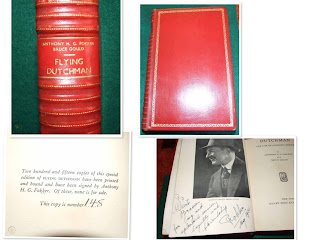 A 1994 issue of AB Bookman’s Magazine listed copy no. 100 for sale. This listing had me scratching my head because it mentioned the book having  a partial dust jacket. 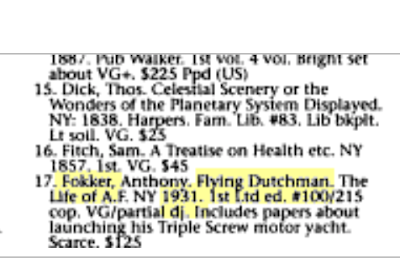 I stopped scratching my head when I read the Smithsonian Libraries listing for copy no. 89. That copy was bound in cloth as well. More importantly, Fokker inscribed and signed the book on the frontispiece page.

Harleana, an eBay seller from East Norwich, New York listed copy no. 96 for sale in July 2021, and at a reduced price because he believed that the signature page was lacking. A former owner had glued the inner front hinge back together, and harleana thought someone had removed the signature page. In my research of Flying Dutchman copies of both special edition and trade editions, I found that the frontispiece page was where Fokker signed and inscribed his books.

I was about to write harleana and let him or her know what I learned when I discovered that copy no. 96 was completely bound in cloth, but with gilt airplanes on the front cover! The Holt trade edition was bound in cloth as well, but without the gilt airplanes on its front cover. I wrote harleana, explained that his book was complete, minus the dust jacket. I offered to buy no. 96 on the spot. We completed the eBay sale the next day and copy no. 96 is headed my way! To have one copy of the special edition was great. But to have  two copies of a special edition, and in different bindings was something else all together. 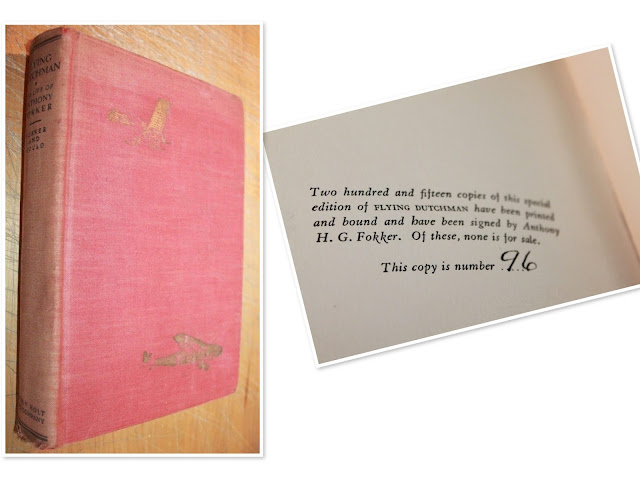 I have to admit that I went off on a tangent in my research of the special edition of Flying Dutchman. Early on I noticed that Fokker’s name wasn’t the only author’s name listed on the title page. Bruce Gould’s name was listed as well. 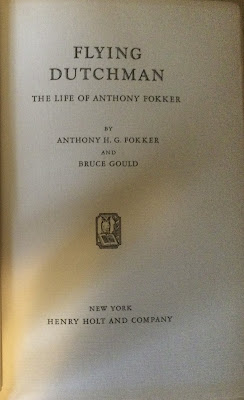 Now one might assume that Fokker received all 215 copies of the special edition from his publisher. But if Bruce Gould was one of the authors, wouldn’t he have received some of the copies of the special edition as well? And if so, that could be why Fokker did not sign all 215 copies. But who was Bruce Gould? And why was he listed as an author of the book?  Nosediving into the web I went again!

I subscribe to the N.Y. Times online, which gives me access to its archives, aptly named The Times Machine.  An April 24, 1931 article, the day Flying Dutchman was published, stated that the book was written in collaboration with Bruce Gould. I then read Gould’s obituary which was published in the Times on Aug 30, 1989. When Flying Dutchman was published in 1931, Gould was the Aviation Editor of the New York Eventing Post. He wrote two aviation books, Sky Larking: The Romantic Adventures of Flying published by Horace Liveright in 1929 and Flying Dutchman published by Henry Holt in 1931. According to the obituary, however, both books were written with Anthony Fokker!

Gould and his wife were co-editors of The Ladies Home Journal for twenty-seven years beginning in 1935. Together, they wrote their biography, American Story published by Harper in 1968. I then read T. J.C. Martyn’s book review of Sky Larking, which appeared in the July 7, 1929 issue of the Times. Martyn made no mention whatsoever of Fokker in the review, but highly touted Gould and his book, writing, “Airmen are not, as a brood, either over-loquacious or literary, and it is fine that such a good writer on aeronautics as Bruce Gould should have written so excellent a book.”

I found one other reference on the web where the author also mentioned that Gould wrote both aviation books with Fokker. But I suspect that her source was Gould’s obituary. Nowhere else on the web did I read that Fokker had anything to do with the writing of Sky Larking. What did I do next? I ordered a copy of Sky Larking online from Resource Books, located in East Granby, Ct! 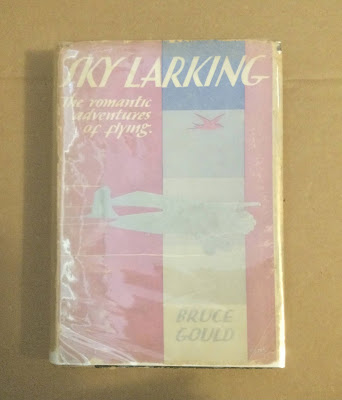 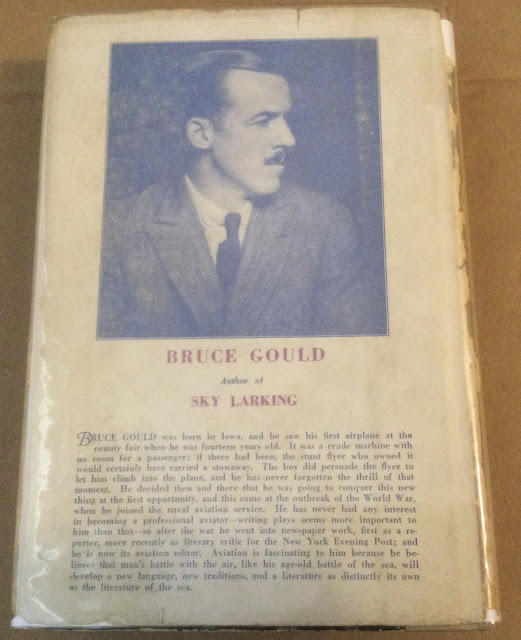 I was surprised to receive the copy only a few days later. Kudos to Tami Zawistowski, the proprietor of Resource Books! If Fokker helped Gould write Sky Larking, Gould might have returned the favor and helped Fokker write Flying Dutchman. I read Sky Larking from cover to cover. I now firmly believe that Fokker had nothing whatsoever to do with this book. Gould himself was an aviator who knew what he was writing about. Even more, he knew how to write! Sky Larking was on the best seller list for a short while in 1929. I enjoyed reading it.  Moi recommends!

I should have been done then and there! But there was still one more source to dive into. And that was the Gould autobiography, American Story. Surely, if it was an autobiography, Gould would mentioned something about collaborating with Fokker on the publication of his book (or books). A preview of Sky Larking was unavailable on Google Books, but I was able to “search inside” the book for snippits.

From the snippit views, I can deduce that Fokker either read or heard about Gould’s Sky Larking book, and hired Gould to ghost write Flying Dutchman. But Fokker added Gould’s name as one of the authors, instead of having just his own name.

And just to put the nail on the head, I wanted to get a copy of Gould’s American Story, and read everything Gould said about his collaborations with Fokker. Willis Monie Books in Cooperstown, N. Y. had a copy, and I’ve bought from him before. But Book Corner Tampa Bay in nearby Brandon, Fl. had a copy listed so I ordered the book from them on Thursday afternoon the 26th of August. I figured I might receive the book on Saturday the 28th, read it over the weekend, and then write about it in this blog post.   That idea, however, crashed and burned. Book Corner Tampa Bay couldn’t find the book!  On Saturday they told me they think they might have previously sold the book and not deleted the listing.  So I ordered the book from Willis Monie Books on Sunday morning, but it will arrive too late for this post 🙁