Friday Lunch contains talks that Paul Ruxin gave before the members of the Rowfant Club of Cleveland at their Friday lunches.  I wanted to buy a copy of the book in 2004 because I was going to be giving a talk before the Florida Bibliophile Society (FBS), and hoped to pick up some tips on giving presentations by reading Paul Ruxin’s book.

Lee Harrer, a founding member of the Florida Bibliophile Society, was a member of the Caxton Club of Chicago as well, and gave me a copy of The Caxtonian during the September 2004 FBS meeting.  This issue contained a talk about association copies that Paul Ruxin had given before the Aldus Society of Columbus, Ohio, in May of 2004.  Lee knew I would enjoy reading the article because Paul Ruxin was a Samuel Johnson collector, same as me. Moreover, I, too, collected association copies.

I did enjoy reading the article, and then wrote Paul Ruxin.  I congratulated him on his article, and introduced myself as a fellow collector of association copies and Samuel Johnson – but on a mailman’s salary (Paul was a partner in a prestigious law firm).  I told him I would be ordering a copy of his book, Friday Lunch, and explained my reason for wanting to buy it.  Paul Ruxin responded and asked me where I had found a copy of his book.  He said he was trying to find copies himself to give to friends.  I told him that at $75, the book was really too expensive for me, so I gave him the bookseller’s contact information, and I thought that was the end of the matter.  I decided to take the day off from delivering the mail the following Friday, and was just about to sit down and have lunch when my mailman came to my door with a parcel for me.  It was a copy of Friday Lunch.  It came with this presentation card: 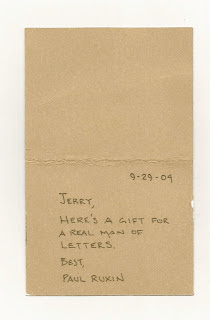 For the next 12 years, I routinely searched the web for copies of Friday Lunch, and forwarded the bookseller contact information to him.  Paul would then purchase the book and decide which friend to send the copy to.  Paul had lots of friends, and never had enough copies for all of them.  On April 15, 2016, Paul Ruxin died in a freak automobile accident.  A chunk of concrete smashed through the windshield of a car he was riding in and struck him.

Old habits die hard, and I still found myself periodically searching the web for copies of Friday Lunch even after Paul died.  One particular copy on AbeBooks struck my fancy in July 2017 even though it was lacking the slipcase.  In his listing, the bookseller wrote, “inscribed by the author to well known literary critic and book reviewer.” Curiosity got the best of me.  I ordered the book for myself.  Here’s Paul’s presentation inscription:

With gratitude and affection, and the hope that the contents will not make an embarrassment of the acknowledgement.

It didn’t take long to identify the former owner of this copy of Friday Lunch. Paul praised him in the Appetizer of Friday Lunch for teaching him how to read.  What did surprise me, though, was that the former owner was still alive, and that he would even consider getting rid of his copy of Friday Lunch.  In retrospect, he was already in his late 80s, so maybe he decided to get rid of his books while he was still alive.  I wanted to make sure I didn’t embarrass him by mentioning him by name in my post so I wrote him.  I informed him that I was a friend of Paul Ruxin’s, that I had bought his copy of Friday Lunch, and that I would be writing about acquiring it on My Sentimental Library blog.  The former owner expressed chagrin that he had parted with Paul’s book, but was glad that I was the one who had it.  He said he was getting rid of things and somehow the book ended in the wrong pile.   That made me feel better.  I decided not write about acquiring his copy of the book on My Sentimental Library blog.  Instead, I sent the book back to him and wrote about something else.  Paul would have liked that.

I was looking for copies of Friday Lunch again on August 31, 2020.  My Australian friend John Byrne had just read my August post to My Sentimental Library blog, “Other People’s Ownership Signatures in My Samuel Johnson and James Boswell Books.”  Friday Lunch was one of the books I mentioned in the post. Surprisingly, John did not have a copy!  There were eight copies of Friday Lunch listed on AbeBooks.  I bought two of them.  One for John, and another copy for me.

I couldn’t have found a better copy for John Byrne!  The former owner’s first name was John.   Paul’s inscription begins, “To John….”   The other copy, even with a word misspelled in the listing, was all too familiar to me:

“inscribed by the author to well knowned (sic) literary critic and book reviewer.”

I stared at the listing for what seemed like hours, hoping that I wasn’t reading into what I thought I was reading. This copy of the book was missing its slipcase too.  Was it the same copy of the book I had bought before?  Curiosity got the best of me.  I bought this copy of the book, but hopefully not for a second time.  Yes.  It was the very copy of Friday Lunch that I bought in 2017.  But this time I’m keeping it!

There is even more that adds to the provenance history of this book.  In 2017, two friends of Paul Ruxin’s, Samuel Ellenport and Gordon Pradl, edited a tribute book to him, The Past As Present: Selected Thoughts and Essays [of] Paul T. Ruxin, for the Caxton Club, the Club of Odd Volumes, the Johnsonians and the Rowfant Club.   The man who wrote the introduction to The Past as Present was the former owner of the copy of Friday Lunch that I bought a second time!  All three books now stand together next to each other in my library as I write about them on My Sentimental Library blog. 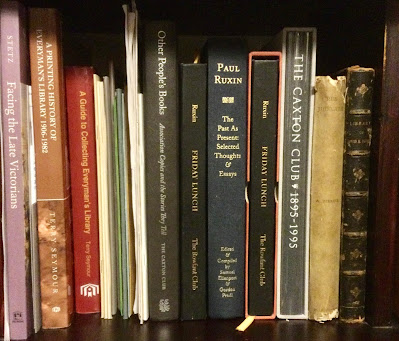