Styles of Cider: The 4 Main Categories Autumn is rapidly approaching, which can only mean one thing: cider season is upon us!

Before you start stocking up at your local beer distributor, consider which type of cider you’d like to sip by the fire on a crisp fall night. In the excerpt below, author and fermented beverage expert Claude Jolicoeur describes the four main styles of cider and how to tell the difference between them.

The following is an excerpt from the Introduction of Cider Planet by Claude Jolicoeur. It has been adapted for the web.

One long-standing question, which is unresolved within the cider community, is that of a good definition of cider. First, I’ll write here the answer to the question, What is cider?, given by the European Cider and Fruit Wine Association (AICV) in their document European Cider Trends 2021:

Cider is an alcoholic beverage obtained only by the complete or partial fermentation of:

The product will have in general an alcohol content within the range of 1.2% to less than 8.5% alcohol by volume (ABV), and should maintain the character of fermented apple juice. Adding distilled alcohol to cider is forbidden.

In the late 1980’s modern ciders were born: ciders containing juice and flavorings began to be produced, alongside traditional ciders. The industry calls these ‘flavored ciders’, and they can contain, in addition to the apple base, ingredients such as juice of other fruits, extracts, flavourings, etc. The range of beverages that share the name cider (or its equivalent in other languages) is huge. In one extreme of this range, we find small producers who grow their own apples, juice them, and make a cider from the natural fermentation of that juice with no other addition. On the other extreme, we find large multinational industrial facilities that produce alcopop-type cider from water, sugar, glucose syrup, imported apple juice concentrate, and chemical flavorings and additives, but often, no fresh apples at all.

According to the website of one of these producers: “Rekorderlig is made by combining the purest Swedish spring water with wild and exotic fruits,” which is quite paradoxical when we know that neither water nor wild and exotic fruits are ingredients in traditional cider making.* In some countries (but not all) these two obviously very different products, alcopop-type cider and real cider, may be seen on the shelves of the same store and share the same name: cider.

Such an absurd situation has been made possible by extremely lax regulations in countries where lobbying from large companies may have contributed to the relaxing of rules. And please, understand me on this: I have nothing against alcopop-type ciders. They exist because there is a demand for them; plus, some of them actually taste good. It is just that I don’t think they should be called cider because they are, really, something else. The fact that they share the same name makes it confusing for the customers who may have difficulty knowing what exactly they are buying. Naturally, things would be easier if cider had the same international status as wine, which has a fairly well-accepted definition throughout the world—it is generally well understood that a fermented mixture of water, sugar, grape concentrate, and other chemicals can’t be sold as red or white wine anywhere on this planet. Such drinks do exist, but they are given a different name.

In reaction to this situation, smaller-scale cider makers try to differentiate their product from some of the industrial offerings. One way of doing this is by adding a qualifier to the word cider. Some people then talk about farm cider, traditional cider, real cider, or craft cider.

Let’s try to see what these qualifiers really mean:

Is It Really A “Craft” Cider?

However good these qualifiers may be, the question remains as to where we draw the line. Some larger producers firmly believe they also produce craft cider, even if they chaptalize (add sugar) heavily and use some apple juice concentrate in their process. They then hijack the word craft and use it in the marketing of their product with bucolic images of orchards that let customers believe they are buying something other than what the product actually is. The point is that, unfortunately, these qualifiers don’t mean much anymore when they appear on the label of a bottle of cider.

It should be said that this question of the definition of craft is not unique to cider. I read recently about this same problem relative to distilled spirits: 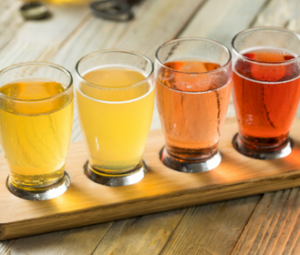 Moreover, since a clear legal definition of “craft” as well as associated concepts is lacking in most countries, big brands often resort to marketing their (mass-produced) products as “craft” (Johnnie Walker), “handcrafted” (Jim Beam), “handmade” (Tito’s vodka) and so on.*

This being said, for the purpose of this book, since I can’t find a better qualifier, I will nevertheless call the cider that drives our interest by the name craft cider. This is not a perfect solution, of course, as many people have very different perceptions for the meaning of this term. For my part, I see it as the opposite of industrial cider. Hence there is a question of scale of production (craft cider usually being made in small batches), but also, when cider making becomes more akin to a process that is repeated to create exactly the same product batch after batch, it loses the crafty side of it.

I would not consider as craft a cider maker who does systematic chaptalization and/or dilution of his ciders or who uses bulk-bought juices or concentrates, because I think craft cider makers should know their raw material (the apples), where they come from and how they have been grown, and work to make the best possible product while respecting the apples they have. I’ll close this with the opinions of two good friends of mine.

Tom Oliver, a well-known cider maker from Herefordshire, once said: “A craft cider maker has an involvement in every step of the process and can answer any question about the cider,” to which he also added that “he gets his hands dirty.” On the same order of ideas, Mark Gleonec wrote in his blog:

Cider is the product of an orchard.

Cider is the work of a cider maker.

Cider is a cultural marker.†

And I think these two quotes taken together say it all. Hence in this book we particularly draw our attention to ciders that are made by cider makers who get their hands dirty and know about the cider they make—from the apples that have ripened in a nearby orchard to their respect for the culture or tradition relative to the region of production.

Get to the Polls to Vote on School Board, Millage Rates