Vermicast 101: Good for Soil and Plants


Worms aren’t just the squiggly, pink creatures found on the sidewalk after it rains. They are so much more than that. These highly regarded specimens play a vital role in enhancing our soils and revitalizing the health of the plants we need to survive. But how do we get them to work their magic? Through vermicast.

The following excerpt is from The Worm Farmer’s Handbook by Rhonda Sherman. It has been adapted for the web. 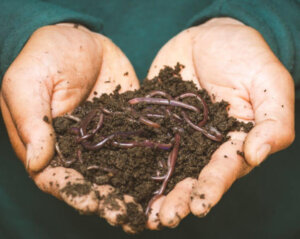 Let me clarify that although vermicast is used as a general term, the vermicast from my worms is not identical to the vermicast from your worms, and your vermicast is going to be different from that of other producers. That’s because the nutrient content of vermicast (and its electrical conductivity, bulk density, moisture, pH, hormone and humic acid content, et cetera) depends on the types of feedstocks and bedding you provide for your worms in addition to how you raise them.

How do different types of vermicasts affect plants? Differently, of course! Some degree of generalization is necessary, however, so let’s compare cow manure vermicast to vermicast made from hog manure, paper waste, and food waste. The Soil Ecology Laboratory at The Ohio State University used these four types of vermicast for numerous studies, comparing their effects on plant growth and yields, germination rates, and pest and disease repellency.

As you might guess, the composition of nutrients, hormones, and humic acids in these four different types of vermicast had different effects on specific plant species. For example, some plants reacted more positively to hog manure vermicast than to paper waste vermicast, and it was the opposite for other types of plants. The differences aren’t necessarily drastic, but they’re significant enough that if you or your customers are raising a specific crop, such as strawberries or tomatoes, you may want to feed your worms the feedstock that will produce the vermicast with the most favorable effects on that particular plant species.

There are many variables to keep track of and evaluate. The take-home message is simple, though: Different feedstocks and methods of raising worms will produce distinct vermicasts, and these vermicasts will have a range of effects on plants.

New approaches to agriculture have the potential to improve crop production, human health, and the environment. Land-grant universities are working with growers and the US Department of Agriculture to test innovative techniques for better managing soil. Three new primary practices that promote soil health have emerged—all of them directly opposed to the decades-old farming practices that relied on use of synthetic fertilizers, herbicides, and pesticides. Instead of disturbing the soil with tillage, no-till practices are being adopted. In place of planting the same crop over and over, rotational cropping is being encouraged to increase soil fertility and reduce soil erosion. Instead of leaving soil bare between rows or after harvest, farmers are planting legumes, vegetables, or grasses to cover the soil, thus returning nutrients to the soil, reducing erosion, and supporting biodiversity.

Vermicomposting, too, can play an important role in the remediation of soil. Research studies have shown that vermicast improves soil aeration, porosity, and water retention. The reason vermicast improves the physical structure of soil has to do with its enhanced microbial populations and activity, absorbent organic matter, polysaccharides, and mucus secretions that help cement soil particles together, causing aggregate stability.

Incorporating compost and/or vermicast into soil provides the following benefits:

Each plot received the same amount of nitrogen fertilizer (as determined by the amounts already existing in the soil, the levels of nitrogen in the two vermicast applications, and the turnip plants’ needs). We installed devices to collect rainfall runoff and analyzed the nutrient content to determine how the addition of vermicast affected runoff water quality. Although we were not studying the effect of vermicast on plant growth, we couldn’t help noticing the astounding differences between turnips with no vermicast amendments, and those with 10 percent and 20 percent by volume. 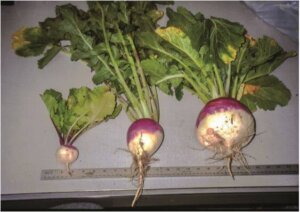 We took a quick photo of three representative turnips. Look at how much more extensive the roots are on the two larger turnips, in addition to the size differences. This is a dramatic example of how vegetable growers can hit the jackpot simply by adding 10 percent by volume vermicast to the soil.

Note that all three turnips received equal amounts of nitrogen. Nitrogen is the most important nutrient needed by plants, so if different amounts of nitrogen are not influencing the plant growth, what is? Although vermicast contains a variety of crucial macro- and micronutrients, it appears that the following elements in vermicast have an even greater effect on plant growth: humic acids and plant growth hormones such as gibberellins, cytokinins, and auxins.

How much vermicast is being used in these experiments? Scientists have reported plant growth increase by incorporating 5 to 50 percent by volume vermicast in soil mixes. At application rates of 60 percent or higher by volume, plant growth is affected negatively. Dr. Arancon states that vermicast provides the greatest benefit to plant growth when it makes up 10 to 40 percent of the growing medium by volume.

Although many effects of vermicast are independent of nutrient availability, vermicast also does make two important nutrients more available to plants: nitrate and calcium. Nitrate is the type of nitrogen most needed for healthy plant growth. Many studies have shown that vermicomposting promotes nitrification—the conversion of ammonium-nitrogen to nitrate-nitrogen. Earthworms have calciferous glands that excrete calcium carbonate into worm castings. Calcium is vital to plants for building strong cell walls; it also enhances the absorption of nitrogen.

Episode 128: Our Loved Ones’ Favorite Plants

How to Get Rid of Ants in the Garden Naturally