Home » When it All Comes Together: The Barn Raising
Garden

When it All Comes Together: The Barn Raising


This is the moment the Barn Club has been working towards: the barn raising.

As Robert J. Somerville mentions in this excerpt, in modern times the task of barn raising has been given to bigger, stronger machines. But there is something deeply fulfilling about using your own two hands, along with the hands of others, to raise a barn yourself.

The following is an excerpt from Barn Club by Robert J. Somerville. It has been adapted for the web.

(Unless otherwise noted, all photography curtesy of Robert J. Somerville.)

It was early in the morning of the day of the raising, and the weather forecast for the weekend was proving to be correct: a clear blue sky and no wind. When I arrived, the yard at Churchfield Farm was strangely silent and tranquil. The sun was up, yet there was still a delicious freshness and clarity in the air. It may have just been the excitement of the big day, but it seemed to me the silence was charged with anticipation, poised for an event. Looking around, it also felt like the site itself was smiling. 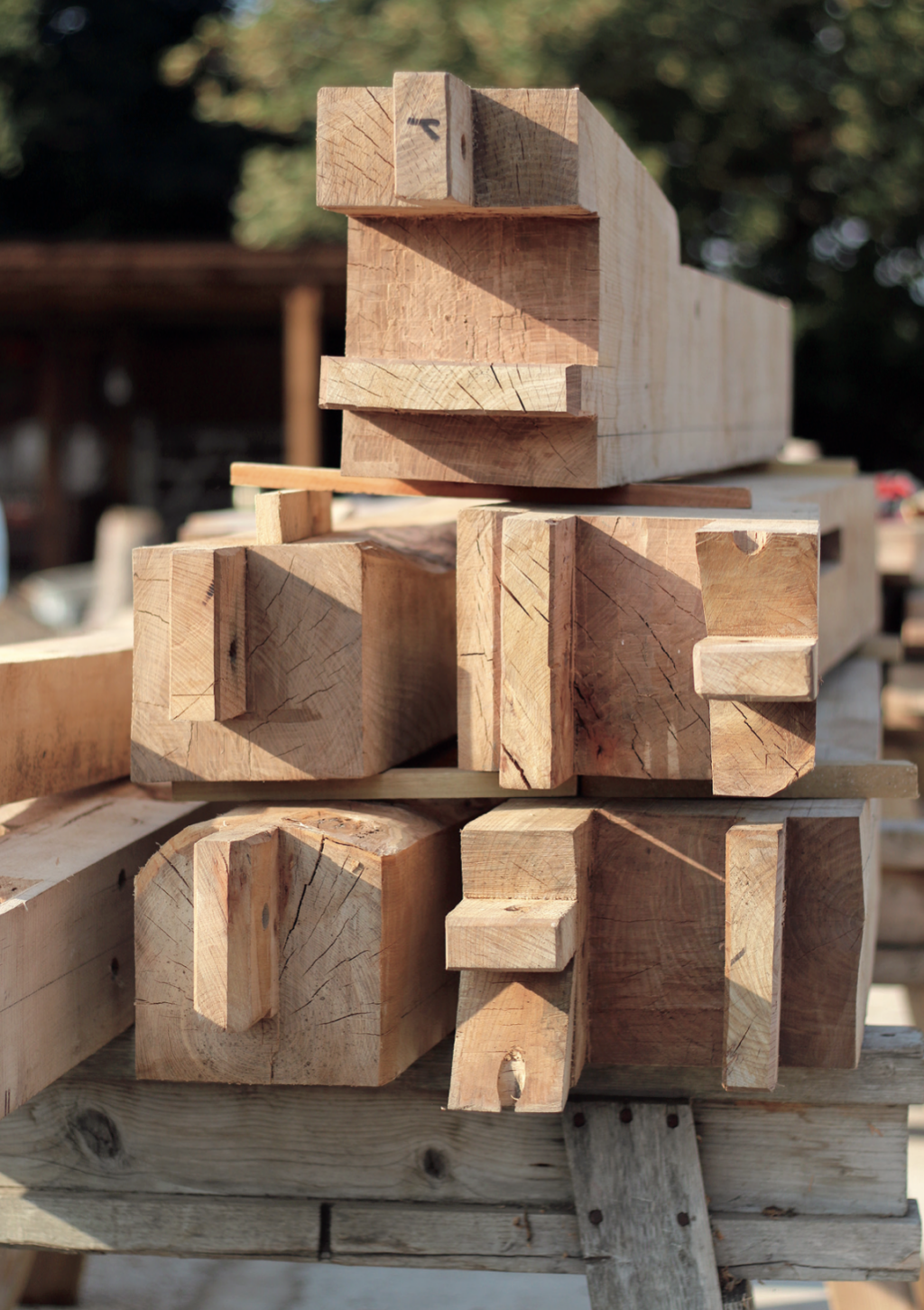 Jowl posts sawn, stacked and ready for the barn raising.

All the days, weeks and months of preparation were to come together that day. The focused efforts of dozens of people, from the felling of the first elm tree to the shaving of the last oak peg, were drawing to a moment of truth. All 309 of the framing timbers were stacked in their respective frames in the order that they would be needed, ready and waiting. There was nothing left to do, and even if there had been, no time left to do it.

As usual, Bruce had been out even earlier to tend to the animals, fill the tea urn with water and switch it on. By the time anyone else arrived it would already be quietly simmering. As I started to unpack some tools from my truck, I saw that a fellow timber framer, Herbert, was also up and about. He seemed as excited as I was, and he remembered that morning well:

The whole raising weekend was an amazing event. I camped in my van overnight and woke up early the next morning, prepared my breakfast and sat down in a camp chair to watch the sunrise on what was going to be a beautiful day. At that moment I realised how lucky I was to be involved in such a great project and with such wonderful people. A community was about to arrive, to raise a new vernacular building into the landscape in front of me, for this generation and future ones to enjoy.

Gradually, the Barn Club crew began to arrive and settle with a cup of tea, have a chat, and gaze across the site at the evidence of the work of their own hands. We all felt directly connected to the stacks of timber laid out around the framing yard in front of the brick plinth of the barn. These stacks of jowl posts, curving braces, long plates and rafters and endless studs. All neat, deliberately ordered, and each piece with its unique identifying carpenter’s mark. The tenon ends protruding from a stack of jowl posts reminded me of the piles of salvaged ancient timber from the barn I had helped demolish in Sussex many summers before. In the intervening years I had gathered the experience to know what all the different timbers were for and how this enormous jigsaw was to be completed.

A frame raising entirely by hand is a very rare event these days. 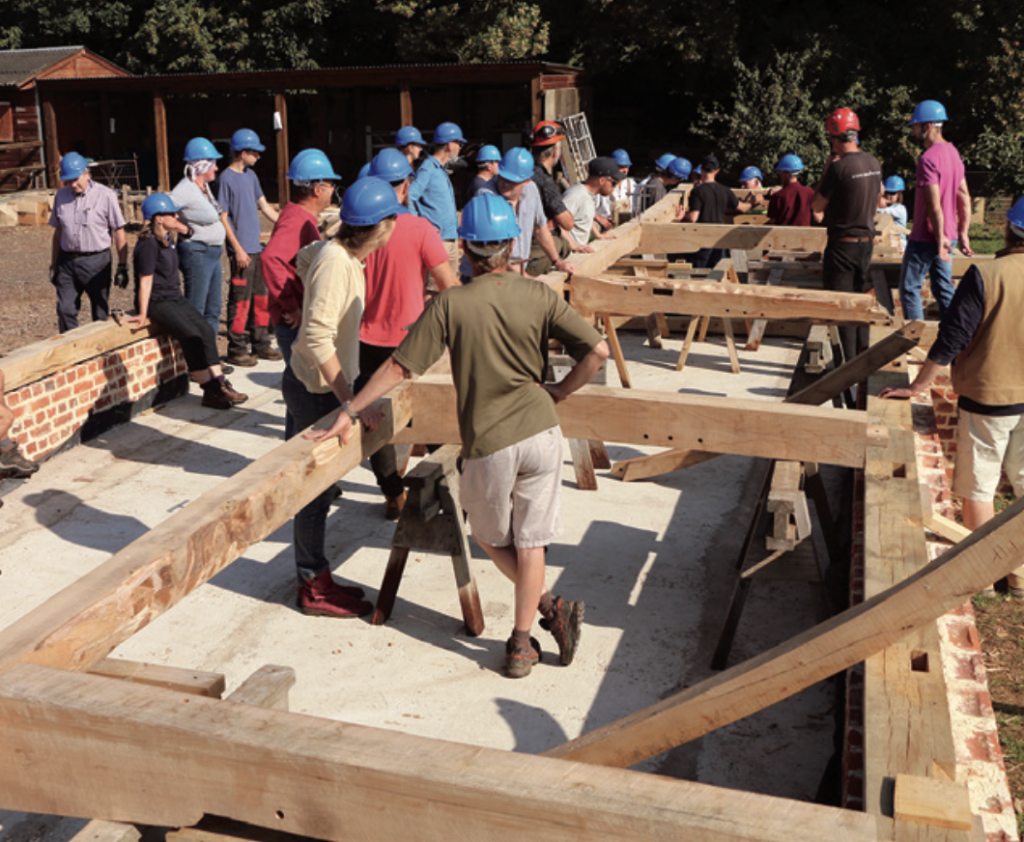 The back wall frame in position ready to raise.

It doesn’t need to be, but machines, particularly big strong ones, have replaced human muscle. The knowledge of how to do it, or even that it can be done at all, has gone from our rural communities. It’s good to have the machines to make life easier, but a shame to lose the skills and confidence that lets us do these things for ourselves. It felt very empowering to know that the several tons of wood in the yard that morning could all be lifted and placed in position by our own muscle power. From previous experience, I also knew that it wouldn’t be too arduous. With enough people, anything is possible. Though, obviously, lifting heavy objects above head height can be a risky business, so a hand raising needs to be approached thoughtfully and with great care. A frame raising is a highly organised event.

The day before the raising the sole plate was assembled on the plinth and everything had been double-checked. It must be the same for many ‘big day’ events. You run through all sorts of scenarios in your head and worry about things to find the weakest link. You walk around trying to picture what was about to happen and see if anything is missing. My eyes landed on the peg buckets. The ends of some pegs were looking a bit ropey. So I checked through them and sorted out the slight seconds, and one or two that were best described as ‘curiosity pegs’. Some were just a little short or too small at the head. These ‘shorties’ would be fine for the studwork, but not the primary frame. Those that were cigar-shaped could be slimmed down to the desired gradually diminishing shape with a drawknife. A block with a 3⁄4-inch test hole is a useful peg-checker. If the peg slips easily into the hole until two-thirds of the way up, it will be okay. If the peg falls straight through, it goes into the kindling bucket. A last-minute peg-shaving session brought the total up to the 303 pegs required. With that done, there was nothing left to do but go home and rest… as if that were possible amidst all the excitement!

In the past, whole communities gathered to raise buildings, just as they did for harvests and other tasks. This principle, of everyone joining in together, is part of the joy of the day. A frame raising by hand amounts to a festival, with food and drink provided. For days in advance, Esther Carley had been preparing the food with help from local friends. A long list of people had been contacted to let them know about the raising. There were old friends, new friends, relatives and neighbours from the village, and of course all the volunteers and their own guests who were curious to see what Barn Club was all about. Whilst we waited for enough people to swing the first frame into position, Herbert and a small team secured short props to prevent the sole plates from being pushed sideways as the frames swung upwards. 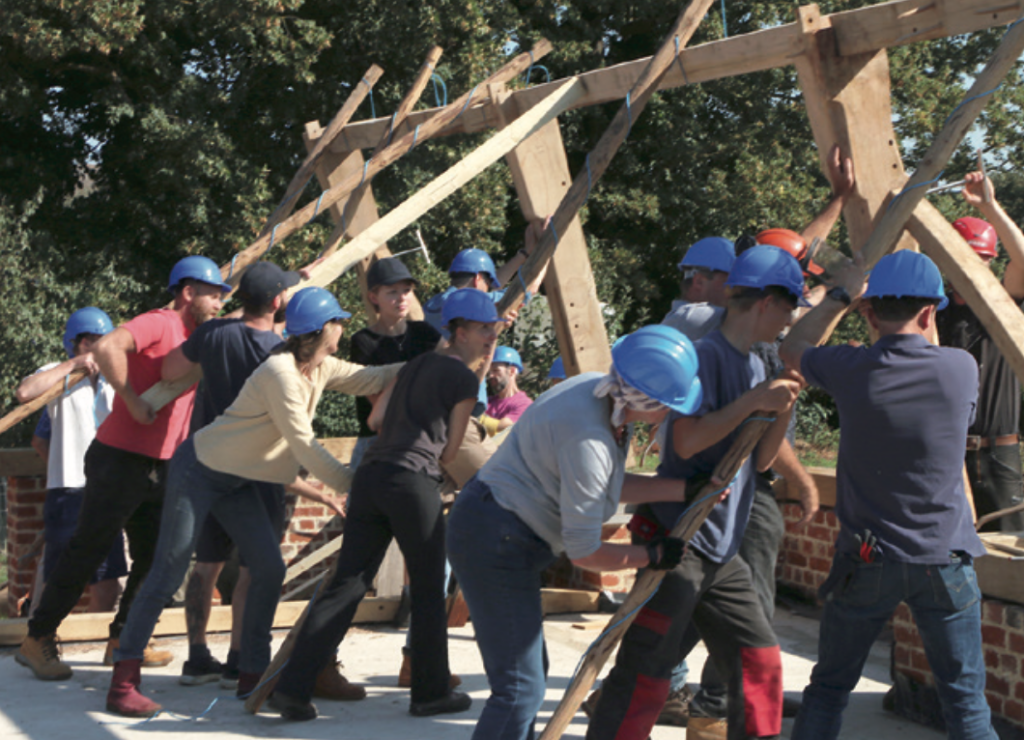 The back wall frame swings upright.

As people arrived, I encouraged them to feel they could become involved, and join the raising team, even if for a short while – and many did just that in whatever way they felt comfortable with. Some had no previous knowledge of woodwork, let alone timber framing, and yet were more than capable of pulling on a rope when given a signal. Some had a lot of experience. None more so than timber framer Joel Hendry, who came up from Devon to coordinate events along with his teenage son Marlin. There were another seven framing carpenters as well, who would be familiar with the components of a frame. With the volunteers included, and others who came just for the day, there were forty-eight people eager and willing to help. As the 10am start time approached, the site was filling with a throng of people, and excitement was building.

“Barn Club” came into being in 2015 when a few local people became fascinated by Robert’s intention to build a new traditional elm barn on his family’s smallholding.

They wanted to get involved. Working outdoors in the fresh air, with age-old hand tools and techniques such as plumb-bob scribing, is a richly rewarding experience … all culminating in the day of the barn raising. More and more people became involved and several carpentry courses were incorporated into the program. Complete beginners, and people of all shapes and sizes, found their place in the team and often surprised themselves as they discovered how easy it is to pick up these “village carpentry” skills. The fact that people want to volunteer demonstrates how much the skilled use of hand tools is a boost to our physical and mental well-being.

The Barn: Cathedrals to Nature

The Power of the Mesquite Tree

Interview with Lindsey Sparks, Author of Song of Scarabs and Fallen Stars

Planting Plan for a Garden that Fills in Fast

How to Use Frost Cloth in a Vegetable Garden

How to Grow Tradescantias – A Tough Houseplant with Beautiful Foliage